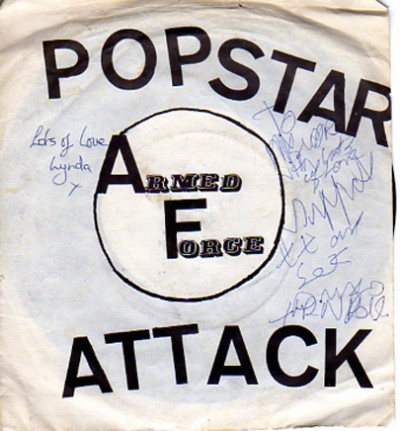 Signed by the band after a Mayflower gig probably in late 1978 or early 1979.
a double a side "Popstar" and "Attack"
not sur how many were pressed but I am guessing it was in the hundreds
Artefact added : 21st August 2008
by abdom

mitch Says –
I may have remembered this wrong but I think Muppet who worked in Discount Records in Underground Market was in Armed Force?

abdom Says –
You are correct. It had slipped my memory the name of the shop and the fact that Muppet (Paul Smart) worked there. He was later in a band called Yukio Tani with me and a few others. I believe he can occasionally be found at a Stayleybridge Celtic game with some of the ex members of the band (Yukio tani).

mitch Says –
Thanks for confirming that abdom; I saw Armed Force play live but at present can't work out where or with whom. Chances are it's at BOTW or one of the pubs in what is now the northern quarter. Muppet / Paul was a good guy who saved me a second batch release of JD Unknown Pleasures and got my ticket for Futurama 3 and countless other small recommendations; the guy won't recall me (I was 16 - 17). But that's the great thing in life; you don't know who you influence / inspire. 28 years later I clearly recall Muppet working in that shop and having a clear opinion and up to the moment view on what was happening.

Alastair Says –
I've just been hunting round, and can't lay my hand on my copy. Probably a rare unsigned one! ( joke ) . However I remember that the label was hand written on what appeared to be a reversed BA Robertson single label. Presumably the cheapest option available. the DIY punk ethic at its finest.

chips2007 Says –
A lot of Great Punk/New Wave bands played at this venue during the late 70's. The gigs were promoted by Rob Crane, Armed Force Manager and Andy Zero, City Fun. The average cost of a ticket £1.00 - £2.00.
Do you remember the bands that played here, such as Crass, Ultravox (who had just released Vienna), The Ruts, Slaughter and the Dogs, Joy Division, The Fall, The Distractions to name but a few. Yes it was a dive but after Rafters closed it was the only alternative venue alongside The Russell Club (Factory). Muppet and Lynda were the singers in Armed Force, Norman on Drums, Jim and Aki on Guitar and Colin on Bass. They played a lot of the support gigs here and although the following was local, it was always a good night except for the long walk home. The guy that owned this club also owned the Nile Club in Moss-Side but his daughter ran the Mayflower. There should be a plaque where the club once stood to commemorate the start and end of a great era and also one of the Greatest Concerts ever in Manchesters history 'Stuff the Superstars' Anarchy at its best.

abdom Says –
here here! you didn't mention the Buzzcocks Vibrators the Damned. Not to mention the famous story that Neville the owner who was West Indian answered phone to the Clash's manager and said he had never heard of them! so what could have been the best gig ever was ended right there. I bet his daughter (forgotten her name) was a little miffed.

Someone in work told me about this site and it is like a long walk down memory lane. Great to see some of the old names that were around during this period, contributing to this site.

I have some memorabilia which I hope to download soon but need to get this scanned and sent to this guy in the states, who wants to release a Manchester collective cd called Messthetics. So hopefully a version of popstar will be included on this.

I have been trying to get hold of Muppet, so if anyone sees him at a Stalybridge Celtic game, I would appreciate it if you could let him know.

Oh and yes I remember Neville, so it doesn't surprise me that he said that to their Manager.

He also turned down other bands, around this time, but none as successful as the Clash, if only they played, what a story to tell the kids. This is why Rob and Andy started to get involved in putting on bands.
All the best,
Colin

abdom Says –
G'day Colin I now live in Australia and had given up hope of ever reminiscing with any of the guys from the old days. especially as many of them I only knew by their nicknames. I am still in touch with Hamrick from down your way and Aidan Cartwright who only ever went to the poly I think now lives in Oz too and we catch up from time to time despite him being in Sydney and me being in Melbourne. Haven't seen Muppet in yonks but went out for a beer 2 years ago round town with Hamrick 2 members of Yukio Tani and Steve Mardi from the Hoax. The Yukio Tani guys Phil Lee and Simmo both reckon Muppet turns up to Stalybridge quite often.
Do you remember Franny Killeen (levenshulme)or Selwyn (brooks Bar) or even Tony Cairns (Denton)
I am still in touch with them. they all frequented the Mayflower at one time or another.
ps email me at keelaghers@iinet.net.au
As I have a photo of you at a party in Hulme in about 1983 I will dig it out and send you it and the rest from the same party

m11ckx Says –
hi
i used to hang out with the guys from armed force,i think linda had a cortina
i was there when we all got banned from dukinfield town hall and when the band played a gig in rochdale.
i was one of the unofficial roadies (there were many of us)
i remember mike from virgin (tall and skinny)
i had a copy of the record but have lost it over the years, would love to listen again to attack, it used to be played often at the Russel club
any photos from that time would be great to see (i think)haha
bye
mick

Gnash Says –
I have a mp3 file of Pop Star if anyone would like me to email it to them....

abdom Says –
G'day Gnash I cannot help feeling our paths must have crossed at some time.
I would love Pop star on MP3 I still have the single (pictured) but I have no turntable so never get to play my old stuff.
my email is keelaghers@iinet.net.au
Cheers
Paul/Abdom

Jenny B Says –
Hey Gnash, I would so love to hear Pop Star again, Armed Force were one of my favourite local bands - cheers folks, good times! jenactive@hotmail.co.uk Hoho I remember the Clash rumour, me & my mates were huge Clash fans but being regulars at the Mayflower we just had to shrug it off!!

abdom Says –
I have just been told that Rob Crane the manager of Armed Force and Organizer of the famous "stuff the superstar" Gigs at the Mayflower has passed away. (I hear the funeral is on Friday). A sad loss he was a good bloke

bouncy Says –
I had a signed copy of this too. I remember how excited the band were about it coming out.I went to most of Armed Force gigs. They were really nice generous people. After a night at the Russell Club,about 15 of us would crash at their flat in Hulme. Sad to hear about Rob Crane passing. Muppet did a lot of organising. He was very passionate against Racism. Once we travelled by coach to Walthamstow Town Hall to attend a Rock Against Racism conference, with Armed Force, as they were playing. The windscreen blew in on the way down and coming back to Manchester it was freezing as the driver just covered it over with some polythene,which blew in as soon as we got on the motorway. I think everyone just covered themselves and huddled together towards the back of the coach. I remember the coach pick up point was outside the Russell Club and I think it was November 78? I wonder if Colin and Linda are still a couple?

simmo Says –
I'm pleased to report that Muppet is fit and well. We sponsor a few games at Celtic each season and he is still a star man. Fantastic walk down memory lane. Abdom it was good you meet up a couple of years ago. Any plans to come back over. Went to Rob Cranes funeral. Died pretty suddenly. He was a great guy and the most biased Man City fan ever. He would never acknowledge A Man UTD goal in the derby so if City lost 3-1 he would celebrate a 1-o win to City. We gave him a great send off. We are thinking of putting the Brigade back together next year but cant get in my Brigade vest top.

Reading through your emails and finding out that Rob has passed away is something of a shock to me. I am gobsmacked and I can't believe that Rob is no longer here.

Gary, if you ever read these communications I want you to know that I am extremely saddened by this news and know that you must be devastated.

Although we haven't seen each other in such a long time I will always have the fondest memories of Rob, especially when Rob and I would go to Cavendish House for a pint and a sandwich and occasionally meet up with Mick from the Frantic Elevators and talk about football, which was always of great interest and humour to us all, especially as Rob and I were die hard City fans and Mick was, well lets just say, Mick was not a City supporter.

Rob, although not the greatest Band Manager in the world was never short of commitment. I shared a flat with Rob, Muppet and Dave in the early days of the band and admired his enthusiasm in everything that he thought was a good idea. 'Stuff the Superstars' wil be forever immortalised in history as will Rob telling Tony Wilson to F*** Off at the Mayflower Club, shortly after Tony wanted to take over the single after its release that night. It seemed like a good idea at the time!!!!!!!

Rob will always be dear to my heart and I am sure that those of you who knew Rob Crane, you will also have an anecdote or two to share.

Rob, I drink to your memory, your humour and your love of Manchester City .... RIP

Great company, great music, great atmosphere and it's FREE to get in!!! - edit

Adam Cooper Says –
Just discovered this great 45 - did Armed Force ever record anything else? Be great to know :)
Adam
Love Child Records
www.lovechildreco...

colintheblue Says –
Only bands I remember seeing at mayflower club were Adam and the ants, pre hell and one of the skinhead bands i.e. Cockney rejects, not sure tho !
I left early that gig as they were trying to give skinhead haircuts, and I'm sure mine was like joey Ramone at the time
If you'd like to leave a comment, please Login. Login
Manchester Digital Music Archive is licensed under an
Attribution-NonCommercial-ShareAlike 4.0 International License.
Charity no. 1164179
Our archive currently contains 3682 Bands, 732 DJs, 1344 Venues, 224 Industry Professionals and 22630 artefacts contributed by 3695 members.