Magazine, Slaughter and the Dogs
Flyer
The New Osborne Club
1980 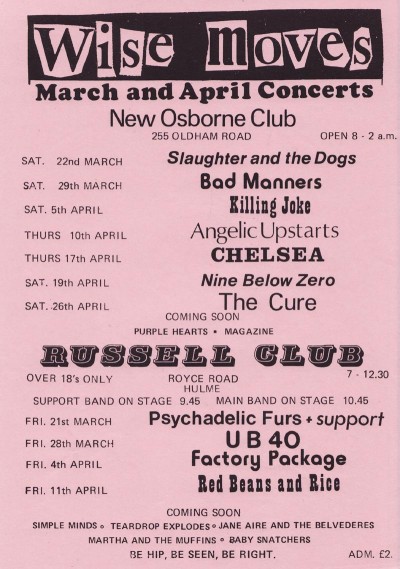 Wise Moves concert leaflet (flyer - uggh, so American) from inside City Fun issue 20. Only Manchester act in sight are Slaughter and The Dogs (with Magazine coming soon).

Venue later the Thunderdome, was it? 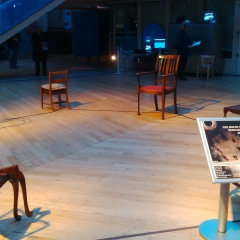 southsider Says –
If this is the club I'm thinking of, it was one, if not THE roughest place I've ever been in my life-I'm sure walking through modern-day Kabul would have nowt on a night out at the "New" (WTF did they do to the "Old Osbourne) Osbourne club. It was located in a delapidated shack, nestling in the middle of a primeval council estate. On the night in question, the gig had been cancelled and a small group of us got holed up in the club with a gang of racist thugs-average age 9 years old trying to kick the doors in. It was broad daylight and we had to get a -the indignity of it-police escort back to Piccadilly away from the baying feral urchins. I was glad to get back to the Factory/Russel Club which seemed sedate by comparison.
If you'd like to leave a comment, please Login. Login
Manchester Digital Music Archive is licensed under an
Attribution-NonCommercial-ShareAlike 4.0 International License.
Charity no. 1164179
Our archive currently contains 3816 Bands, 743 DJs, 1437 Venues, 298 Industry Professionals and 28735 artefacts contributed by 3926 members.