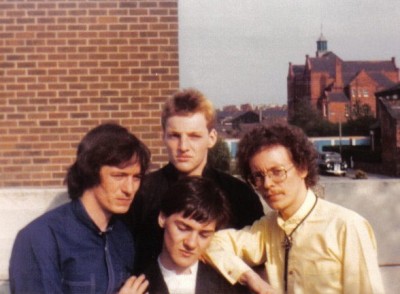 Resting...they are no more!Influences:OMD, Depeche Mode, Human League, Tubeway ArmyBiography:Originally formed in 1981, Forgotten Heroes became slightly well-known in the Salford area, appeared in the Salford City Reporter a couple of times and did a few local gigs but spent most of their time writing songs and recording in Colin's house and St Luke's Parish Hall!

One night at a meeting of St Luke's Arts & Drama Society (SLADS) I was showing some of the lads my synthesiser, which I was using for some sound effects in the current show, when all of a sudden someone started banging out a rhythm on some cardboard boxes along with the riffs I was playing. It sounded pretty good to us. The following week I took my guitar to the hall as well as my synth. One of the lads, Paul Whittle, said he had written some words to what we did the previous week. Another, Andrew Burke, said he would like to have a go at playing the guitar and our first electro-rock song was born: Alpha...Beta...Romeo!
Early Forgotten Heroes

All we were short of was a bass player and in stepped Dave McGinlay, a friend from work, who was also a member of SLADS. He could not play as yet but he was very enthusiastic and I just happened to have a bass guitar. Next to join was Steve Fennel, a local artist, who had been into robotic dancing and now wanted to be involved with electronic music. He had his own synth - a Korg MS-10 and a SynDrum - so he was in!
Many more songs followed, from Paul, 'Burky' and myself. We rehearsed in my front room, which resembled a mad scientist's workshop, with all the syths and cables running everywhere! My son, Michael was brought up to the sounds of our music (no wonder he is also musically inclined!).

Our first gig was in support of the Scanner Appeal at Hope Hospital, supporting a group called Sidewinder. It was held in the canteen and it was a disaster! My amplifier, which was being used for guitar, keyboard, drumbox & vocals (!) insisted on buzzing continuously and then the drumbox started playing up. We managed to carry on though - but it was a bit embarassing! We did have a much more successful gig later, in our Parish Hall, this time in aid of Pendlebury Children's Hospital

One day, we got an offer to record a song in a recording studio, for inclusion on a compilation LP. We were all really excited and thought that this was the beginning of the big time! The studio was in Stockport and was part-owned by a member of a local band called 'Belgian Bitch', who later became 'Belgique'. After watching 'Belgian Bitch' at a local pub, we were transported to the studio, where unfortunately wires had been crossed (ha! ha!). The recording engineer was still in London and was not due back until the next day. However, we were let into the studio, where we set up our gear and played some songs and slept there overnight! The following morning Dave & I had to get to work and the others were still at school, so it was quite an adventure getting back in time! Eventually, we did record our track (Alpha...Beta..Romeo) but we never got onto a compilation LP because our master tape was 'lost' ! Luckily, we had made a rough cassette copy so we could still hear it on tape!

Next came a very sad event: Burky, who had had a few problems, committed suicide. It was an incredible shock to us and it was terrible to lose such a nice-looking lad.
We decided to carry on as a 4-piece band and continued to play locally. We even got a write-ups in our local newspaper for our cassette mini-album and some of our gigs, such as the Carlton Cinema, which was the biggest (and emptiest!) venue we ever played! Our last couple of gigs were in Manchester, at the Britannia Hotel (very posh!) and the now demolished Gallery Club.

Steve eventually left to go travelling and the rest of us decided to call it a day, after three enjoyable years!
Artefact added : 4th April 2009
by tubeway