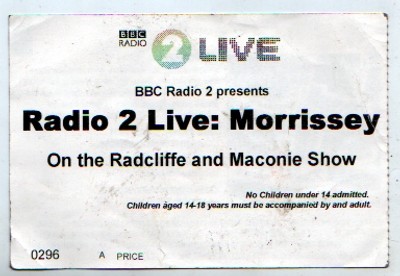 I was lucky enough to win two tickets to see Morrissey performing an intimate gig for Radcliffe and Maconie's Radio 2 show atthe Radio Theatre, Broadcasting House in London.
Queued all afternoon in the drizzle with two blokes who were RAF policemen back from Iraq and Afghanistan! ( -they issue more tickets then there are places, which is probably a good idea for Gardener's Question Time, but not for Morrissey. )
Interviewed outside for The One Show ( thankfully not used ) as 'an older Morrissey fan'- cheers.
We were in the second row, I sat next to a woman who said I looked like Guy Garvey!
The gig was brilliant, Moz was his usual funny self, he even did a few old Smiths' songs-This Charming Man and I'll Keep Mine Hidden- and came back on after the programme finished to do a couple more.
Artefact added : 2nd May 2009
by Alastair

bouncy Says –
I remember Waves very well.It was a very small place.We used to go there Sat night after Steve Toons UMIST hard rock disco had finished. It was on Dantzig street down an alley opposite where Tiger Tiger is now. When you entered Waves you were given a meal voucher,and if you were hungry you could go upstairs and have sausages and beans,which was very welcome.I'm veggie now. Run by the DJ Graham Brookes,who moved on to The Electric Circus after that. He always had a freind/partner with him,but I can't rermember his name.

Alastair Says –
I think your comment has ended up on the wrong artefact!
The sausage and beans sound nice, I'm slavering already, although i don't know if Morrissey would approve!

bouncy Says –
When you saw Morrissey,Alastair,did he mention Waves?

Alastair Says –
The name is tattooed on his heart, alongside that of the Headbangers' Ball at Middleton Civic...

bouncy Says –
Speaking of Ed Banger, I'm sure I saw them with Moz at the poly Mcr 1978.I knew him then as Steven and I was stood right at the front,but sadly I was'nt impressed.Obviously he was destined for greater things.

Alastair Says –
I think there could be a huge discussion about that- 'failure to recognise greatness when confronted by frankly dodgy early performances'. There are other people who send a shiver down the spine from the first time you see them.

Alastair Says –
I used to put a few gigs on in Rochdale at Yates's Wine Lodge for a short while in the mid eighties, and knew one of an early Inspiral Carpets. He asked me for a gig, so I inquired what they sounded like. He said " a cross between the Sex Pistols and Hawkwind ". I'm ashamed to say I didn't get back to him.
Another time I had the contact for Pete who was in the early Stone Roses, but couldn't afford to put the money up for them to play at the Lamplighter in Rochdale. Another life changing moment missed....

bouncy Says –
Never mind,'If only's' can drive you crazy. I think what it was when I saw Ed Banger,was that it sounded like the same song played over and over,and I heard that Ed Banger used to do that.Also,that particular punk style,did'nt really suit Moz.I'm glad he didn't give up!
If you'd like to leave a comment, please Login. Login
Manchester Digital Music Archive is licensed under an
Attribution-NonCommercial-ShareAlike 4.0 International License.
Charity no. 1164179
Our archive currently contains 3760 Bands, 739 DJs, 1426 Venues, 286 Industry Professionals and 28012 artefacts contributed by 3879 members.