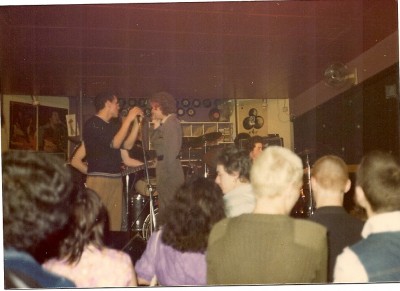 Photo of Armed Force on stage at the Russell Club (Factory) around 1978. I can't remember who we were supporting on this night.

If anyone can recognise themselves as watching, backs of heads only visible I'm afraid, then please put me out of my misery and let me know.

Alan Wise would often ask us to support at the club, especially if the original support band didn't turn up, as we only lived down the road and would carry our gear to the venue.

Ohh.... and we were never paid more than a couple of quid each time we played but this money did add up eventually and pay for us recording our first single Popstar/Attack.
Artefact added : 7th November 2009
by chips2007