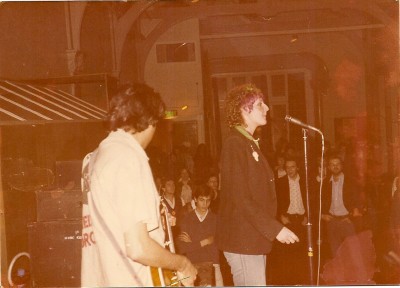 Linda and Aki onstage at The Squat.

Nice to see a photo showing some of the audience that night. I was going to say crowd but feel that numbers were not that immense this night.

Do you recognise yourself in this photo?
Artefact added : 8th November 2009
by chips2007

simmo Says –
Hi Colin, its Simmy. Can you contact me via my email being info@marketavenueracingclub.co.uk. Thanks

SD Says –
Great Band. Used to see them all the time. Bumped into 2 of them at the Patti Smith/Television gig a few years ago (it may be you 2) They knew a mate of mine. They were amazed that they found a fan who could even remember a few of the songs. I have the single, is there any tapes of their other songs knocking about?

chips2007 Says –
Hiya SD; yes it was me and my brother Norman who were at the Patti Smith and Television gig at the Academy.

Remember Norman who got extremely upset at missing Television because I said we had plenty of time and stayed on for a pint or 2 in Big Hands? He's never forgiven me but you've got to laugh!!!!!

I know that Lynda and Norman have some of the early demo tapes, especially some of our set and 'Foreign Press' from the Stuff the Superstars gig, that OZ PA put together. We are also trying to get a copy of the John Peel gig we played at Cavendish House, that we hope his family may have in his archives somewhere.

If I ever get a copies from them, I will make some further copies and send them out to anyone that may be interested

foreignpress Says –
Would love to have a copy of the 'Foreign Press' demo tapes from the Stuff the Superstars day, anychance you could email me at mick.ronson.hof@gmail.com cheers, Colin

chris structure Says –
Hi Chris Connelly here, i am writing a book about Cargo Studios and all the bands who recorded there, I would appreciate if any former member of Armed Force would contact me at chrisdiconnelly@sky.com
Thanks

Abigail Says –
Hiya Colin. Do you have a larger hi res version of this photo? I would like to add it to an online exhibition I am working on for MDMarchive - I'd love to be able to zoom in on some of those audience members!
If you'd like to leave a comment, please Login. Login
Manchester Digital Music Archive is licensed under an
Attribution-NonCommercial-ShareAlike 4.0 International License.
Charity no. 1164179
Our archive currently contains 3608 Bands, 695 DJs, 1318 Venues, 207 Industry Professionals and 19452 artefacts contributed by 3520 members.