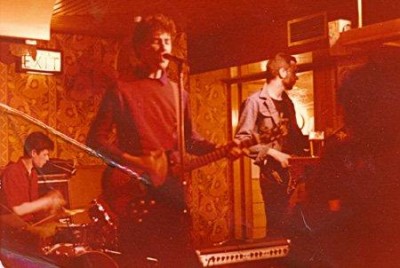 Sent in by Michael Dunne:

The band were members of the Manchester Musicians Collective and included Andy Connell, later of A Certain Ratio and Swing Out Sister and also Jane Lancaster, later of It's a Fine Day by Jane and Barton. Jane joined the band after these pics were taken.
Artefact added : 18th March 2010
by Abigail

images Says –
Pardon the intrusion but that's defo the Portland Bars. I recognise the wallpaper as it's the same on our photo from the same era. Check The Images photos.
Love the pics by the way
If you'd like to leave a comment, please Login. Login
Manchester Digital Music Archive is licensed under an
Attribution-NonCommercial-ShareAlike 4.0 International License.
Charity no. 1164179
Our archive currently contains 3831 Bands, 752 DJs, 1454 Venues, 303 Industry Professionals and 29440 artefacts contributed by 3987 members.