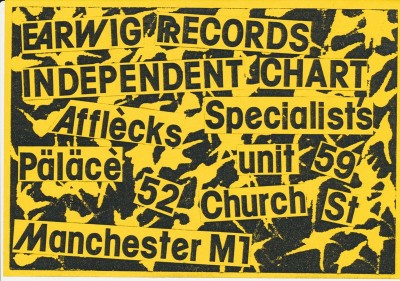 Not sure if I can make this relevant but I’ll have a go; it is/was a record shop that sells music so that must count for something . One time I was selling a load of my records, which I did from time to time, either because I was a bit skint or stopped playing certain choons. (It’s always good to have a clear-out once in a while...).Anyway I don’t know if it was the guy from this particular Afflecks Palace record stall or another one but a mate put him onto me and he called round my flat. Now I didn’t know he was a dealer; thought he was a fan, like meself. Anyway I remember he bought stuff by The Pack, Satan’s Rats ,early Cure , Penetration etc. and ‘cos he seemed mad keen and said he really liked them, I thought fair enough, they’re going to a good home, and let him have them for what I payed for them; i.e. about a quid each ,even though I knew they were worth a bob or too. Aaaanyway turns out said geezer had them up on the wall of his shop for many times more than what I’d received; like 50 squid for one of ‘em or something ridiculous........I gave him a cup of tea with a Bourbon biscuit and everything! Well I never was a good businessman (just another mug punter...?); I just go to work 'n get paid. And I still don’t like dealers... of any kind, to this day. Never seems to be about music, art ,being creative etc. just about the moolah and hanging out with Mammon.....not good for your ‘elf. (Lack of money the root of all evil?...Naah..)Well if I knew it was this guy’s stall I'd like to think I'm petty enough and small enough to not knowingly upload this flyer ,but as there’s every likelyhood it’s not, it’s there now for the whole world to admire in brilliant technicolour, so “eeenjoy “ as they say in all the best cafeterias.
Also there was a band called The Earwigs, fronted, funnily enough by a guy called Earwig. The odd time I jumped in a taxi with him and Mike Rossi back to Woodhouse Park, sharing the load etc. Can’t remember if they were much cop....Can’t imagine I’ll be typing the word “earwig” for at least another 20/30 years or so, but one never knows does one...hmm.?
Can't believe I got all that just from a flyer for a record shop.!...Oh well..
Artefact added : 7th October 2010
by dubwise-er

bit of back story on an earlier post on the archive below...

Abigail Says –
Shame about the Bourbon. :-(

dubwise-er Says –
That was the worst part of this whole sorry tale...

pi1 Says –
That was designed by martin in 1985, shortly after we opened in Afflecks, it would have been around November time.
I have to say though, i have no recollection of anyone going to look at any persons collection, let alone buying any second hand records and sticking them on the wall.

Toony Says –
The Earwigs frontman was actually Steve Brotherdale the ex - drummer from V2 and Warsaw. I did a bit of work with them during '82/83. They were actually great musicians but struggled to keep things together because of a fondness for recreationals, B'dale had a great voice a bit like Jim Morrison (and come to think about it Ian Curtis). Steve Toon
If you'd like to leave a comment, please Login. Login
Manchester Digital Music Archive is licensed under an
Attribution-NonCommercial-ShareAlike 4.0 International License.
Charity no. 1164179
Our archive currently contains 3693 Bands, 736 DJs, 1348 Venues, 242 Industry Professionals and 23373 artefacts contributed by 3710 members.