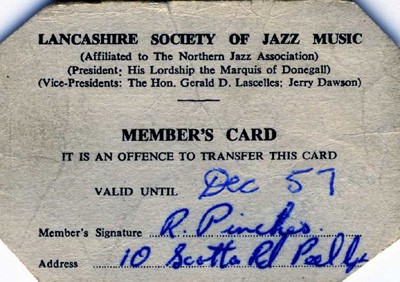 Sent in by Roy Pinches.

Again, Roy can't remember much about this and would like to find out more form any other former Jazz Society members.

I've added the Society as a venue for the time being, until we found out more!
Artefact added : 30th November 2010
by Abigail

krupaman Says –
The L.S.J.M.was based at the Bodega restaurant on Cross St.In the 50's and 60's they had jazz sessions there on Weds.and Sats.Usually the Sat.band would be a London band,Mick Mulligan,Ken Colyer etc.It was a basement club and was THE place on Sat.I went there in the 50's and it was always packed.I used to play with the Dallas Jazz Band on occasional Weds.

Regarding The Vieux Carre club that was the Thatched House pub at the bottom of Market St.just round the corner from the Bodega.Frids.was mainly modern jazz and Sats.was trad.I used to play there with the Dizzy Burton Jazz Aces every Sat.in the late 50's.The name Vieux Carre refers to a section of early New Orleans. Moe

Abigail Says –
Thanks so much for the info, I'll be sure to pass it on to Roy...

1963 Says –
*Posted on behalf of member Peel Green*
Hi Roy,
Remember me, just seen your membership card for the bodega (1957) I was also a member and used to bump into you quite often. I also lived in PeelGreen. I found my membership card a couple of years together with several others,msg,thatched house,bluenote jazzmen (market street) etc. I sold them on e-bay,and thought it was my card when reading Fred Burnetts page, but was quite surprised when I read it was yours.
Since then I think I have met you twice,1958 in the IOM, and about 20 yrs. ago at an old car rally at Chessen Rd. I had my 1948 MG-YA and your car ?
Nice to hear you are still interested in jazz.
Take care,
Alan Pearce.

PeelGreen Says –
Other clubs I belonged to in the 50's included; Bluenote Jazz Club, Club 6, LSJM, Cumberland Gap, Club Southside,MSG and Le Carre Jazz Club.
Maybe some of your readers will also remember these clubs.Some of the clubs I can't remember,i.e, Club 6, Cumberland Gap; I think it's taxing my brain a bit after nearly 60 yrs.The Thatched House I remember was a skiffle group called,"Paul Beaty Skiffle".I don't remeber meeting Roy in any of these,perhaps he went on a different night.
Photos attached to e-mail.
Alan.
If you'd like to leave a comment, please Login. Login
Manchester Digital Music Archive is licensed under an
Attribution-NonCommercial-ShareAlike 4.0 International License.
Charity no. 1164179
Our archive currently contains 3819 Bands, 743 DJs, 1437 Venues, 298 Industry Professionals and 28962 artefacts contributed by 3936 members.