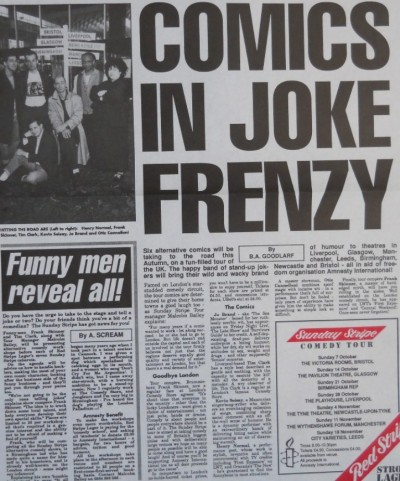 A3 (as I’ve been notably informed) promo for a comedy tour, taking in the Wythenshawe Forum, a venue not often utilised for live bands. The first band I saw there would have been about ’71, not long after it had been opened, and it was Spider Mike King doing a matinee for the kiddies; the first bona fide Rock ‘n Roll band this youngster ever did see. I see from the website he’s still around so on ya big fella! There was always The Impact festival which happened every year and promoted mostly local groups (S.F.W. with John Cooper Clarke guesting, Summer '76 being a particular stand-out); the fiasco with Slaughter which ended in beers and, I believe, the World Premiere of “The Witch that nicked Christmas” by Mike Harding; the stuff of legends if you were about six at the time.
Don’t know if Henry Normal is considered from round these here parts but I'm sure he has a big connection to Manc.ville.
Artefact added : 1st December 2010
by dubwise-er

timaduncan Says –
Henry (real name Pete Carroll) was from Chesterfield, but his production company Baby Cow was based in Manchester. He did loads of gigs as the Heavy Metal Death Goth Poet. He had long hair then. He would be seen in the audience at the Buzz Club and at the Witchwood in the 80's
If you'd like to leave a comment, please Login. Login
Manchester Digital Music Archive is licensed under an
Attribution-NonCommercial-ShareAlike 4.0 International License.
Charity no. 1164179
Our archive currently contains 3796 Bands, 743 DJs, 1432 Venues, 294 Industry Professionals and 28235 artefacts contributed by 3896 members.