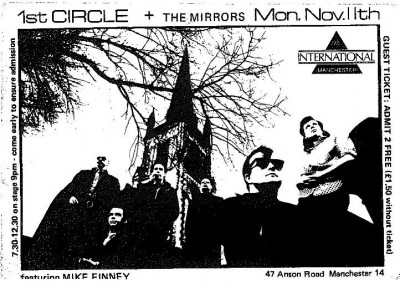 Here's a flyer from what could be First Circle's first headline gig, after a few test gigs at pubs in Didsbury and Stockport and positive reviews in City Fun and The NME

Don, Mark, Alec and Paul were formerly with Dr Filth who were at this time in abeyance.
Paul would be replaced a year later by Neil Roberts ex Radioactive Shoulderblades and Naked in Winter
Artefact added : 22nd December 2010
by Rooster

hammond4sheds Says –
the seminal radioactives gig was at harper hay adventure playground, we borrowed a drummer,had stuart R on farfisa, Paul Kewley bought some grapes and fruit from local fruit and veg shop
and handed them out to the local kids at the gig......they pelted us non stop all the way thro the set.....them harper hay kids know how to throw a grape.

Rooster Says –
I still bear the scars from that gig!
If you'd like to leave a comment, please Login. Login
Manchester Digital Music Archive is licensed under an
Attribution-NonCommercial-ShareAlike 4.0 International License.
Charity no. 1164179
Our archive currently contains 3869 Bands, 758 DJs, 1460 Venues, 323 Industry Professionals and 29710 artefacts contributed by 4047 members.