The Worst
Photograph
The Electric Circus
1977 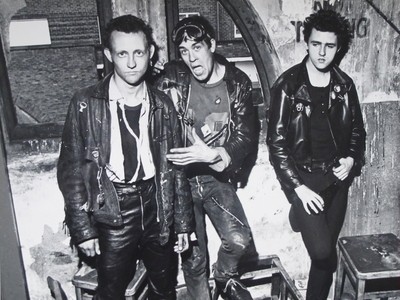 Here is a picture of the original line up of the Worst.
Left to right Ian, Alan and Woody.
Woody was the bassist but got the elbow a bit sharpish, The band added a second guitarist Robin.
They were the punkiest punks of them all! They didn't want to make anything from the music they just wanted to enjoy everything they diid and as soon as they stopped enjoying stuff they stopped doing it. They weren't musicians but they were always great fun to be with.
If you watch almost any documentary on punk there is a clip of a guy in a stripey blazer wearing a leather gimp mask with "RAPIST" written across the forehead, doing a jerky dance - that is Alan filmed at the Roxy in London by Don Letts.
This picture was taken upstairs at the Circus and I'm pretty sure Kevin Cummins took it.

Have now added link to their own website that I recently came across.
Artefact added : 5th February 2011
by FranDaman

twistedwheel Says –
woody was a national front , BNP racist prick , i loved the worst but him being a part of the band tainted it for me, evil idiot!

FranDaman Says –
I don't think he played more than a couple of gigs with them (if that). I never really discussed politics with him, but, I know he was a full on skin within a year of this pic being taken, so you're probably right.

davebentley Says –
Fond memories of the Worst, shame they never made anything, I wanted to record them for Bent Records but Richard Boon kept promising them he would do it but he never did - booo hisss, I think their first gig was with us [The Drones] at the Squat along with the Fall and Joy Division what a line up! They just turned up and asked if they could play, initially we had to say no due to the stage already being full of equipement, they said they would play on the floor in front of the stage I said go for it, I pissed myself when they brought the drums in, a Chad valley bass drum and a 1930's snare and a 'cymbal' they played with one vocal mike and they were BRILLIANT fabulous lyrics and attitude, for those of you who didn't like Woody the other two always beat him up after every gig for being useless on the bass, he could only play by the dots poor thing

Spud1957roxy Says –
HI,THE WORST PLAYED RAFTERS A FEW TIMES.THEY SEEMED TO BE THERE ALL THE TIME WHEN I USED TO GO.76/77.THEY ALWAYS LOOKED THE REAL DEAL TO ME.PUNKS...NEVER SOLD OUT...

Terry Hodgson Says –
I knew 2of the members of the worst personally, Ian and Alan, i didn't know Woody, but Alan's wife told me the reason they got rid of him was not because he couldn't,but because he could, also they said he didn't move enough, if you want to know what happened to them, as far as I know Ian (Ozzie still lives round Preston, and Alan split up with his wife and went to live in America, Ian told me once that Warner Brothers rang them up and offered them £5000 to sign a recording contract, he asked them if he'd heard them play, when he said no Ian told him to f--k off lol they are on a record somewhere, but there's no name of the group or name of the tune, they started it for a laugh and that's what they did, they were playing at the cavern club one night, backing up the Buzzcocks, and he asked me and my girlfriend at the time who was a friend of his wife's to go, in one of the brakes Alan said let's go to the dressing room, we went in and Pete Shelley was there, Alan introduced me and Shel

Wendy Cape Says –
Dave Bentley where are you!