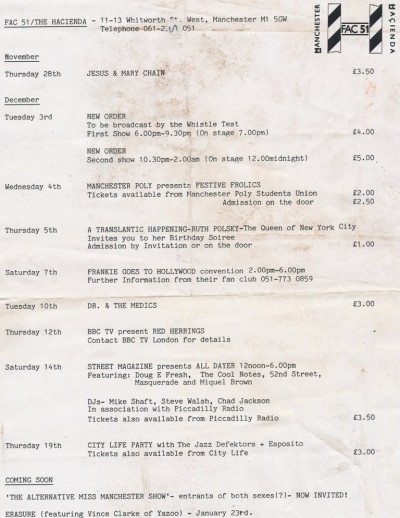 This little bugger nearly got away. Hac. ‘What’s On’ for Nov. ’85, so that means there’s a shed load between the last upload of Oct. ’84 and this one. Wonder what occurred betwixt times.....?
My favourite Scottish mates up top of the page and A New Order Whistle Test Special. Pete Waterman and his fine collection of poppets and Koi carp may have been honorary members of the club but Whisperin’ Bob?...perhaps not. He might have been put out to greener pastures by this time I suspect.
Red Herrings...loved their first couple of records but when they did their concept album of humming Eliot’s “Four Quartets” but without the actual words, I kinda lost interest....etc. Yeah: I've no idea.....The rest is there to see in the non colours of black as well as white.
Artefact added : 11th March 2011
by dubwise-er

So it did really happen, thought I'd dreamt it up, as it says on the tin it ran from noon-6pm and it was pretty hard to get any 'vibe' going on, what with daylight streaming in through the rafters and so on.

I'd forgotten that Doug E Fresh was on (in 6 minutes?) that day, Slick Rick (his partner in crime - tho not literally I'm sure - and later a bit of a legend in his own right) must have been there too