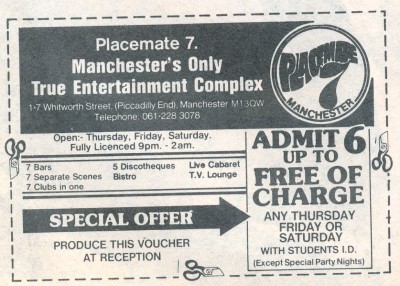 City Life, student special, Sept ’84. Add for Placemates. Don’t think I’ve clocked one before so thought I’d put it up. Hard place to pin down, music policy wise . Although it had lots of rooms it wasn’t really like Pips which at least had The Roxy Room. I think pretty much every room catered for the same chart and disco orientated crowd with an occasional band as I recall. I wasn’t a frequent flyer. As I’ve now learned, it was also the home of the Twisted Wheel for many a year.
A T.V. lounge, now that was a modern concept! Paying into a club so you could watch telly doesn't sound like a whole heap o' fun, but maybe somewhere you could pop into for a ciggie and a good ol' chinwag.....
Artefact added : 26th April 2011
by dubwise-er

You are right about the rooms. All seemed to cater for chart, disco and soul music. I remember seeing the Dooleys play there in the 70s. They gave out a b/w photo of the band for free.

I was heavily into punk and new wave music, going to The Squat, Pips, Rafters and Kelly's. So it is a wonder to me now why I actually attended Placemates on a regular basis....

missizicks Says –
My big sister used to go to Placemate 7 every weekend, around '78-'80. Apparently "Ooh" Gary Davies used to DJ there, before he hit the big time with Radio 1, and his 10cc mates used to pop in from time to time. That's what my sis told me, anyway!

therapydd Says –
Great memories of Placemate 7. I was a goth but loved their room for Bowie music etc but also went to Thursdays (I was after Pips) and Cloud 9.

Rob Oxton Says –
Hi . I used to frequent Placemate 7 with my friends in the late 70's. It was (in my opinion) the best club at the time (we used to do most of the Northwest's main clubs at the time and were out clubbing 7 nights a week so i think my opinion is as good as anyone's on this and my friends would back me up on it) The club had 7 rooms with their own number (hence the title) 5 of them had a disco playing different popular styles (with a chill out room and a restuarant.) The general trend was up to the minute disco and also Jazz-Funk - They played all of the most recent 12" singles which were big at the time. It used to attract all of the trendy types and there were some truely stunning girls and some of the best dancers i have ever seen (not professionals just customers - but you would never know) The place started to go down hill shortly after Gary Davies was brought in as their main DJ (he did the biggest room) he was not much good at it as he never seemed to grasp the reason why the customers were there and tended to igonre his audience (ie; empty dance floor but still wouldn't change the record). He did well getting the job at Radio 1 which suited his all-round style but the damage had already been done and it wasn't long after that the club started to lose its customers to other venues such as Valley lodge (near the airport) and Benny's (near Bury) which were similar trendy Disco/Jazz-funk venues. I have very fond memories of the place and the fun times spent there.
If you'd like to leave a comment, please Login. Login
Manchester Digital Music Archive is licensed under an
Attribution-NonCommercial-ShareAlike 4.0 International License.
Charity no. 1164179
Our archive currently contains 3870 Bands, 758 DJs, 1461 Venues, 323 Industry Professionals and 29722 artefacts contributed by 4048 members.