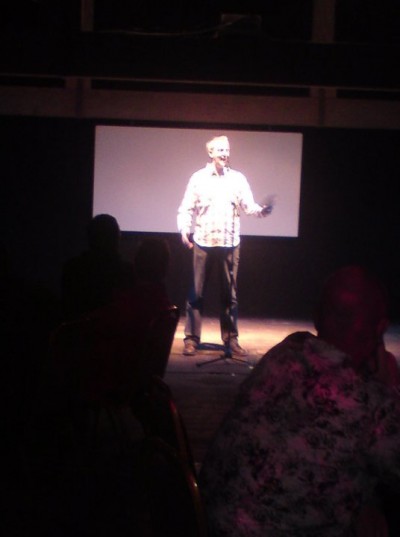 This is a photograph of me performing my poem Bop Til You Drop (Tonight I'm Gonna Party Like I'm Nearly 99) at a recording of the Zeitgeist programme for Channel M tv. The venue is the Adelphi building of Salford Uni, off Chapel St.

I'd earlier taken part in a studio debate on whether rap is poetry alongside Ra Page of Literature North West/ Comma Press and a young rap artist Nia Jai who was (is?) signed to Rio Ferdinand's label.

The poem is about kidding yourself that you're still down with the kids - I thought it best to take the piss out of myself before anyone else could!

I don't think the footage was ever screened though because whatever happened at Channel M happened very soon after this was recorded.
Artefact added : 13th July 2011
by Tony/Longfella