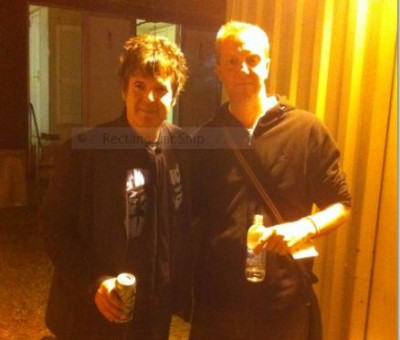 I performed at Kendal Calling again this year and managed to sneak into the inner sanctum backstage after Blondie's fantastic headline set on the Sunday night.

I met Chris Stein and drummer Clem Burke (pictured) but also the one and only Debbie Harry. I gave her my cd which she promised to listen to, had a pic taken and got a peck on her cheek as her hands were full with wine and food. She was shorter than you might imagine, very polite but gave off that "don't fuck with me" New York vibe. Legend! All I need now is for the guy to email me the photo!!!

A key band, Blondie. You can trace everything post-punk, disco/dance and hip-hop back to NYC in the mid 70s and Blondie were there for all of it at once. Respect!
Artefact added : 1st September 2011
by Tony/Longfella