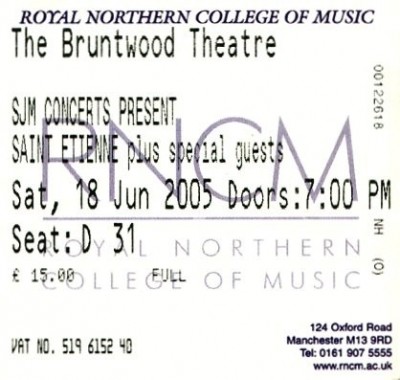 Ticket for Saint Etienne at the RNCM 2005.

This was to promote the Tales from Turnpike House album, support was from Jane Weaver and Andy Votel. Well it would have been if there had been some decks in the building! While there was no DJ set we did get a beautiful performance from Jane.

Despite playing in a room that resembled a lecture theatre, Saint Etienne soon had everyone up on their feet. Highlights for me were Who Do You Think You Are featuring Debsey (Dolly Mixture/Birdie) and an encore of Nothing Can Stop Us Now. With Granada TV's Wigan Casino documentary on the video screens, Sarah invited the audience on to the stage to dance. Chaotic it may have been but an amazing finish to the gig.

The after show was at an incredibly hot Cornerhouse where the Saint Etienne boys joined B-Music residents Dom Thomas and Andy Votel. Bob and Pete played plenty of records from an afternoon trip to Beatin' Rhythm, Bob managed to carry on DJing while I probably asked him 101 questions about Dolly Mixture, Field Mice and Jackie Lee etc. I had been drinking, sorry Bob.