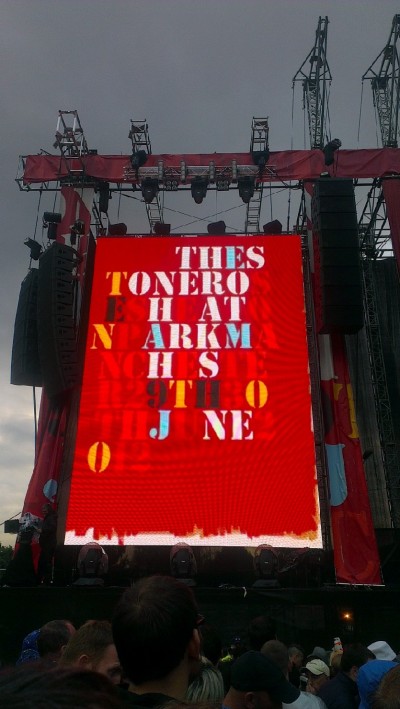 I Wanna Be Adored

(Song For My) Sugar Spun Sister

This Is The One

She Bangs The Drums

I Am The Resurrection
Artefact added : 4th July 2012
by cody

cody Says –
I took this picture at 9pm on the Saturday night. Friends stood close shoulder to shoulder.

The time was nearly upon us, within minutes The Supreme’s ‘Stoned Love’ filled the rain soaked Manchester air and the moment had arrived.
Four men walked onto the stage. Four men greeted by 75,000 fans roaring their approval.

The opening notes from ‘Adored’ snaked out of Mani’s bass, and the place erupted. The people sing and a 22 year time void begins to close.

The first part of the set was a shimmering reminder of the 60‘s influenced psychedelic pop that made them stand out back when. A mixture of debut album tracks ‘(Song For My) Sugar Spun Sister’, ‘Shoot You Down’, ‘Bye Bye Badman’- Singles and B-Sides- ‘Sally Cinnamon’, ‘Where Angel’s Play’ & ‘Mersey Paradise’. All met with anticipation and positive response from the crowd. The first of two ‘Second Coming’ tracks breaks the reflective moment and affirms that ‘yes this is happening’. ‘Ten Story Love Song’ rolls and sheets of shimmering rain fell and blew across the lilac and red stage lighting, this seemed the moment when band and crowd connect. Then comes a truly blissful working of ‘Standing Here’ Ian Brown whispering cool ‘I should be safe forever in your arms’ a special moment.

Every track was a moment in it’s own right. Accompanying each track was it’s own individually styled visual which beamed out from giant screens both sides of the stage. A mixture of black and white, colour or solarised thermal imaging of the band as they performed, layered with Squire’s Pollock style artwork, lemons and the letters from the current tour posters dripping from the screens.

Then comes the groove. Mani’s Bass throbs into your chest, Reni’s flawless drumming rhythm rises up and both warp into the recognisable opening of ‘Fools Gold’…… heads down, time to dance! Across the park the dusk faded and the lights and lasers cut through the night sky . As Ian’s vocal cools out, the fluid Roses rhythm pours its way through your synapses…. and then the guitar. John Squire takes off, striking chords and manipulating licks, feedback and electricity bounce around the stage to mesmerising effect. Ian Brown glides around the stage with 2 tambourine shakers in hand, held high, sprinkling the magic as he goes. Fifteen or so minutes on and the groove cuts deeper ‘Somethings Burning’ rumbles and winds it’s way throughout the collective consciousness of the Park and gives you time to stand and watch the glorious playing this band are capable off. The big screens emit colourful cascading lemons

The chiming chords of ‘Waterfall’ come next, the crowd up the singing levels and smile. The psychedelia flows as the thankfully received ‘Waterfall’ morphed into the backwards glory of ‘Don’t Stop’ - lyric and dynamics collide 'Wake I still look I feel loose.
We're all here now who's the first, ease into my heart....' A mutating wall of evocative noise and reverse reverb ensured a definite effect....mindblowing.

The heavy blues guitar sneer of ‘Love Spreads’ crashed through the fug, clearing the senses, preparing you for the rise.

‘Made Of Stone’, opened up & emotions fly, a powerful song, a great chorus no sign of the crowd faltering. ‘This Is The One’ felt like the song that referred to the day, what all in attendance had been waiting for.

‘She Bangs The Drums’ next and the party shifts towards its peak, 20 + years fall away, band and crowd are here and now. ‘Elizabeth My Dear’ was followed by the triumphant rush.. ‘I Am The Resurrection’ and what a rush it is, Reni’s Northern Soul beat driving the euphoric pulse, its time to look around and draw on the moment just as I had done back when. Crimson smoke flares burn bright across the crowd, a sea of upstretched hands push high into the night sky & sing it…. ‘I Am The Resurrection and I Am The Light’… we have lift off. The pause hits, the groove sucks you in and the outro gets the treatment ‘Fools Gold’ got earlier, the finale shows that the band are enjoying the moment as much as the crowd are. Nobody wants this to end but when it did the four men that are The Stone Roses meet centre stage, hug and bow to the crowd.

The Roses brought the magic to Heaton Park for sure, the Northern Lights shine again.
If you'd like to leave a comment, please Login. Login
Manchester Digital Music Archive is licensed under an
Attribution-NonCommercial-ShareAlike 4.0 International License.
Charity no. 1164179
Our archive currently contains 3676 Bands, 737 DJs, 1354 Venues, 239 Industry Professionals and 22352 artefacts contributed by 3637 members.