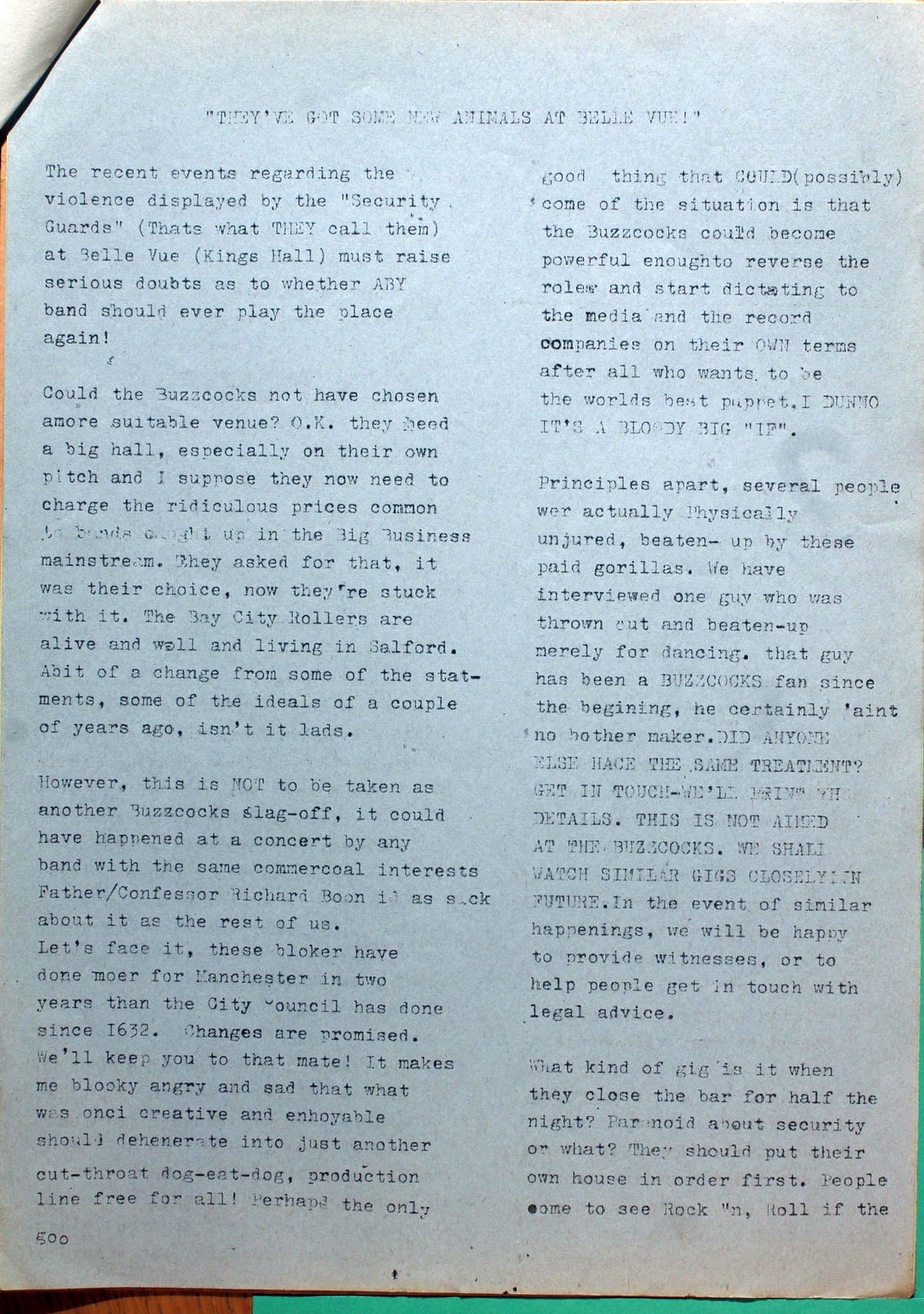 "THEY'VE GOT SOME NEW ANIMALS AT BELLE VUE!"
The recent events regarding the violence displayed by the "Security Guards" (Thats what THEY call them) at Belle Vue (Kings Hall) must raise serious doubts as to whether ABY band should ever play the place again!
Could the Buzzcocks not have chosen amore suitable venue? O.K., they need a big hall, especially on their own pitch and I suppose they now need to charge the ridiculous prices common to bands caught up in the Big Business mainstream. They asked for that, it was their choice, now they're stuck with it. The Bay City Rollers are alive and well and living in Salford. Abit of a change from some of the stat-ments, some of the ideals of a couple of years ago, isn't it lads.
However, this is NOT to be taken as another Buzzcocks slag-off, it could have happened at any concert, by any band with the same commercoal interests Father/Confessor Richard Boon is as sick about it as the rest of us.
Let's face it, these bloker have done moer for Manchester in two years than the City Council has done since 1632. Changes are promised. We'll keep you to that mate! It makes me blooky angry and sad that what was onci creative and enhoyable should dehenerate into just another cut-throat dog-eat-dog, production line free for all! Perhaps the only good thing that COULD(possibly) come out of the situation is that the Buzzcocks could become powerful enoughto reverse the roles and start dictating to the media companies on their OWN terms after all who wants to be the worlds best puppet. I DUNNO IT'S A BLOODY BIG "IF".
Principles apart, several people wer actually Physically unjured, beaten-up by these paid gorillas. We have interviewed one guy who was thrown out and beaten-up merely for dancing. that guy has been a BUZZCOCKS fan since the begining, he certainly 'aint no bother maker.DID ANYONE ELSE HACE THE SAME TREATMENT? GET IN TOUCH-WE'LL PRINT THE DETAILS. THIS IS NOT AIMED AT THE BUZZCOCKS. WE SHALL WATCH SIMILAR GIGS CLOSELY IN FUTURE. In the event of similar happenings, we will be happy to provide witnesses, or to help people get in touch with legal advice.
What kind of gig is it when they close the bar for half the night? Paranoid about security or what? They should put their own house in order first. People come to see Rock "n, Roll if the