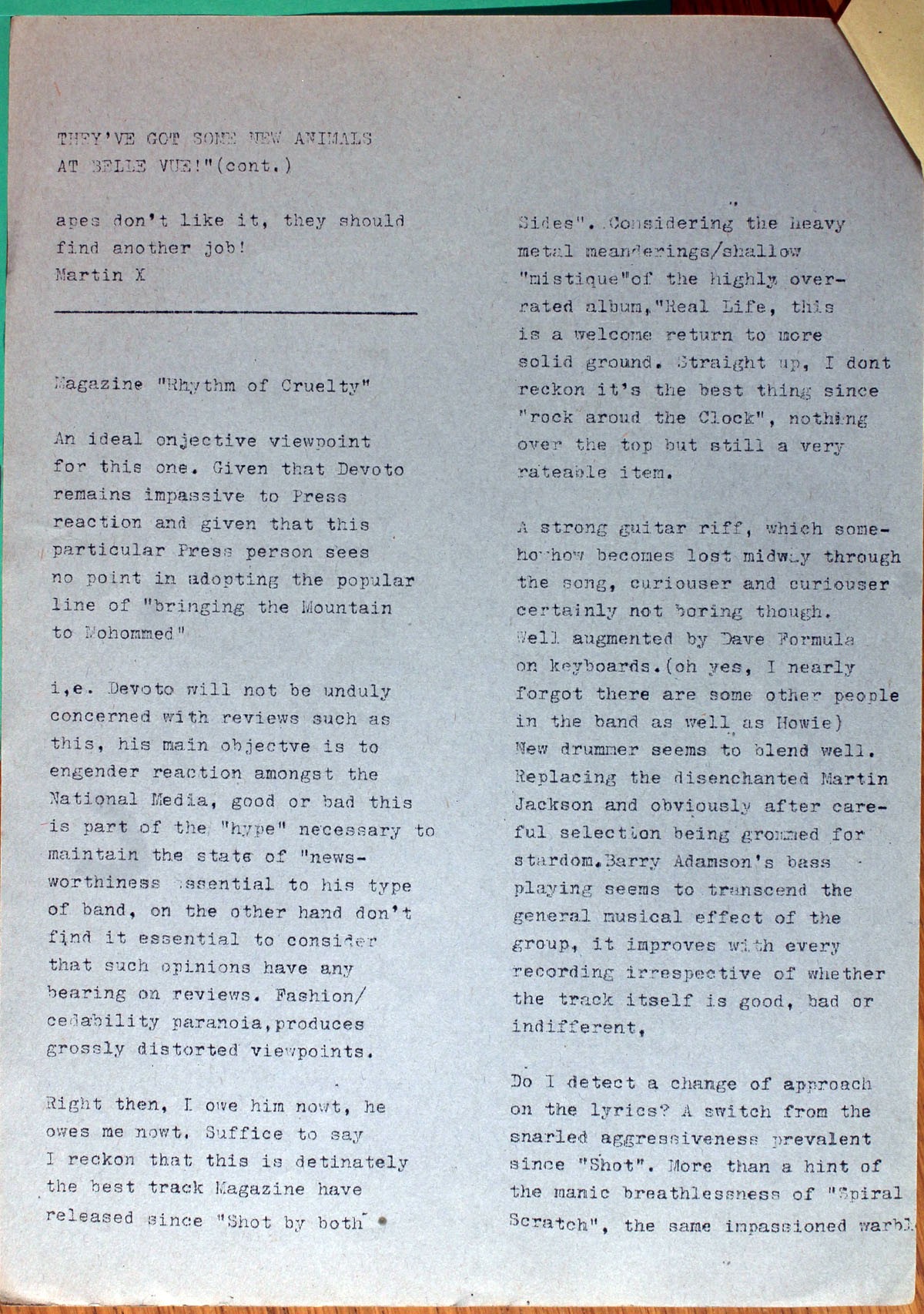 THEY'VE GOT SOME NEW ANIMALS AT BELLE VUE!" (cont.)
apes don't like it, they should find another job!
Martin X
Magazine "Rhythm of Cruelty"
An ideal onjective viewpoint for this one. Given that Devoto remains impassive to Press reaction and given that this particular Press person sees no point in adopting the popular line of "bringing the Mountain to Mohommed"
i,e. Devoto will not be unduly concerned with reviews such as this, his main objectve is to engender reaction amongst the National Media, good or bad this is part of the "hype" necessary to the state of "news-worthiness essential to his type of band, on the other hand don't find it essential to consider that such opinions have bearings on reviews. Fashion/ cedability paranoia, produces grossly distorted viewpoints.
Right then, I owe him nowt, he owes me nowt. Suffice to say I reckon that this is detinately the best track Magazine have released since "Shot by both Sides". Considering the heavy metal meanderings/shallow "mistique" of the highly over-rated album, "Real Life, this is a welcome return to more solid ground. Straight up, I don't reckon it's the best thing since "rock around the Clock", nothing over the top but still a very rateable item.
A strong guitar riff, which some-howhow becomes lost midway through the song, curiouser and curiouser, certainly not boring though. Well augmented by Dave Formula on keyboards. (oh yes, I nearly forgot there are some other people in the band as well as Howie) New drummer seems to blend well. Replacing the disenchanted Martin Jackson and obviously after care-ful selection being grommed for stardom.Barry Adamson's bass playing seems to transcend the general musical effect of the group, it improves with every recording irrespective of whether the track itself is good, bad or indifferent,
Do I detect a change of approach on the lyrics? A switch from the snarled aggressiveness prevalent since "Shot". More than a hint of the manic breathlessness of "Spiral Scratch", the same impassioned warbl