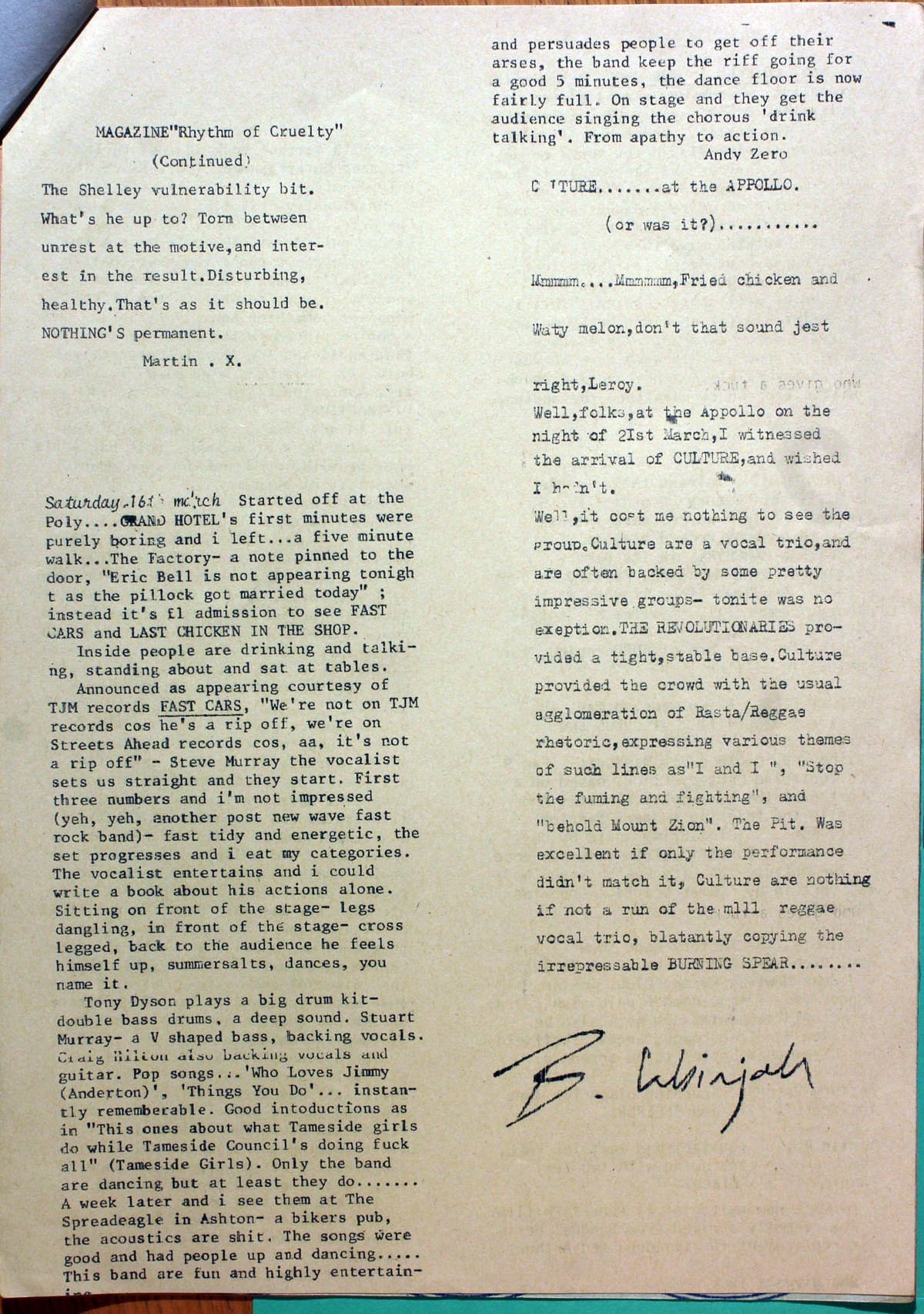 MAGAZINE"Rhythm of Cruelty"
(Continued)
The Shelley vulnerability bit.
What's he up to? Torn between unrest at the motive,and interest in the result.Disturbing, healthy. That's as it should be. NOTHING' S permanent.
Martin . X.
Saturday 16th march Started off at the Poly... GRAND HOTEL's first minutes were purely boring and i left...a five minute walk...The Factory- a note pinned to the door, "Eric Bell is not appearing tonigh t as the pillock got married today" ; instead it's £1 admission to see FAST CARS and LAST CHICKEN IN THE SHOP.
Inside people are drinking and talki-ng, standing about and sat at tables.
Announced as appearing courtesty of TJM records FAST CARS, "We're not on TJM records cos he's a rip off, we're on Streets Ahead records cos, aa, it's not a rip off" - Steve Murray the vocalist sets us straight and they start. First three numbers and I'm not impressed (yeh, yeh, another post new wave fast rock band)- fast tidy and energetic, the set progresses and i eat my categories. The vocalist entertains and i could write a book about his actions alone. Sitting on front of the stage- cross legged, back to the audience he feels himself up, summersalts, dances, you name it.
Tony Dyson plays a big drum kit- double bass drums, a deep sound. Stuart Murray- a V shaped bass, backing vocals. Craig Hilton also backing vocals and guitar. Pop songs... 'Who Loves Jimmy (Anderton)', 'Things You Do'... instan-tly rememberable. Good introductions as in "This ones about what Tameside girls do while Tameside Council's doing fuck all" (Tameside Girls). Only the band are dancing but at least they do...... A week later and I see them at The Spreadeagle in Ashton- a bikers pub, the acoustics are shit. The songs were good and had people up and dancing..... This band are fun and highly entertaining. and persuades people to get off their arses, the band keep the riff going for a good 5 minutes. the dance floor is now fairly full. On stage and the get the audience singing the chourus 'drink talking'. From apathy to action.
Andy Zero
C 'TURE....at the APPOLLO.
(or was it?)........
Mmmmm...Mmmmmmm,Fried chicken and
Waty melon,don't that sound jest
right, Leroy.
Well,folks,at the Appollo on the night of 2Ist of March,I witnessed the arrival of CULTURE,and wished I hadn't.
Well,it cost me nothing to see the group.Culture are a vocal trio,and are often backed by some pretty impressive groups- tonite was no exeption.THE REVOLUTIONARIES provided a tight,stable base. Culture provided the crowd with the usual agglomeration of Rasta/Reggae rhetoric,expressing various themes of such lines as"I and I ", "Stop the fuming and fighting", and "behold Mount Zion". The Pit. Was excellent if only the performance didn't match it. Culture are nothing if not a run of the mill reggae vocal trio, blatantly copying the irrepressable BURNING SPEAR..........
B LABINJAH [Undecipherable signature)