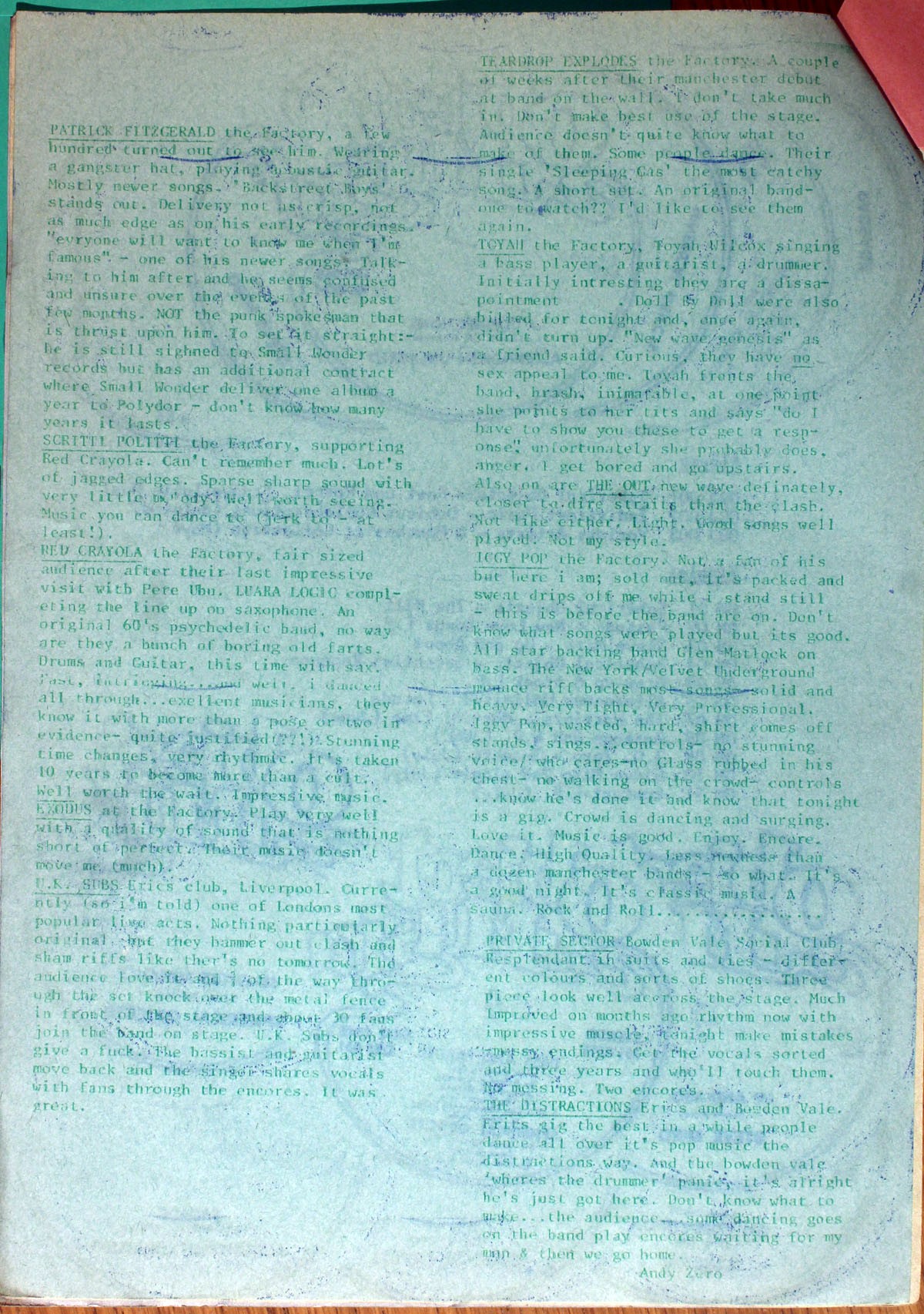 PATRICK FITZGERALD the Factory, a few hundred turned out to see him. Wearing a gangster hat, playing acoustic guitar. Mostly newer songs. 'Backstreet Boys' stands out. Delivery not as crisp, not as much as edge as on his early recordings "everyone will want to know me when I'm famous" - one of his newer songs. Talking to him after and he seems confused and unsure over the events of the past few months. NOT the punk spokesman that is thrust upon him. To set it straight:- he is still signed to Small Wonder records but has an additional contract where Small Wonder deliver one album a year to Polydor - don't know how many years it lasts.
SCRITTI POLITTI the Factory, supporting Red Crayola. Can't remember much. Lot's of jagged edges. Sparse sharp sound with very little melody. Well worth seeing. Music you can dance to (jerk to - at least!)
RED CRAYOLA the Factory. fair sized audience after their last impressive visit with Pere Ubu. LUARA LOGIC compl-eting the line up on saxaphone. An original 60's psychedelic band, no way are they a bunch of boring old farts. Drums and guitar, this time with sax. Fast, intriguing and well, i danced all through...excellent musicians, they know it with more than a pose or two in evidence - quite justified (??!) Stunning time changes, very rhythmic. It's taken 10 years to become more than a cult. Well worth the wait. Impressive music.
EXODUS at the Factory. Play very well with a quality of sound that is nothing short of perfect. Their music doesn't move me (much).
U.K. SUBS Erics club, Liverpool. Curre-ntly (so I'm told) one of Londons most popular live acts. Nothing particularly original but they hammer out clash and sham riffs like theres no tomorrow. The audience love it and 1/2 way through the set knock over the metal fence in front of the stage and about 30 fans join the band on stage. U.K. Subs don't give a fuck. The bassist and guitarist move back and the singer shares vocals with fans through the encores. It was great.
TEARDROP EXPLODES the Factory. A couple of weeks after their manchester debut at band on the wall. I don't take much in. Don't make best use of the stage. Audience doesn't quite know what to make of them. Some people dance. Their single 'Sleeping Gas' the most catchy song. A short set. An original band- one to watch?? I'd like to see them again.
TOYAH the Factory. Toyah Wilcox singing a bass player, a guitarist, a drummer. Initially interesting they are a dissa-pointment. Doll by Doll were also billed for tonight and, once again, didn't turn up. "New wave genesis" as a friend said. Curious, they have no sex appeal to me. Toyah fronts the band, brash, inimatible, at one point she points to her tits and says "do I have to show you these to get a resp-onse." Unfortunately she probably does. anger. I get bored and go upstairs. Also on are THE OUT, new wave definately, closer to dire straits than the clash. Not like either. Light. Good songs well played. Not my style.
IGGY POP the Factory. Not a fan of his but here I am; sold out, it's packed and sweat drips off me while i stand still - this is before the band are on. Don't know what songs are played but its good. All star backing band Glen Matlock on bass. The New York/Velvet Underground menace riff backs most songs - solid and heavy. Very Tight. Very Professional. Iggy Pop, wasted, hard, shirt comes off stands, sings...controls- no stunning voice/ who cares-no Glass rubbed in his chest - no walking on the crowd- controls...knows he's done it and know that tonight is a gig. Crowd is dancing and surging. Love it. Music is good. Enjoy. Encore. Dance. High Quality. Less newness than a dozen Manchester bands - so what. It's a good night. It's classic music. A sauna. Rock and roll.........................
PRIVATE SECTOR Bowden Vale Social Club. Resplendant in suits and ties - differ-ent colours and sorts of shoes. Three piece look well across the stage. Much improved on months ago rhythm now with impressive muscle, tonight make mistakes messy endings. Get the vocals sorted and three years and who'll touch them. No messing. Two encores.
THE DISTRACTIONS Erics and Bowden Vale. Erics gig the best in a while people dance all over it's pop music the distractions way. And the bowden vale 'wheres the drummer' panic. it's alright he's just got here. Don't know what to make...the audience...some dancing goes on the band play encores waiting for my man & then we go home.
Andy Zero