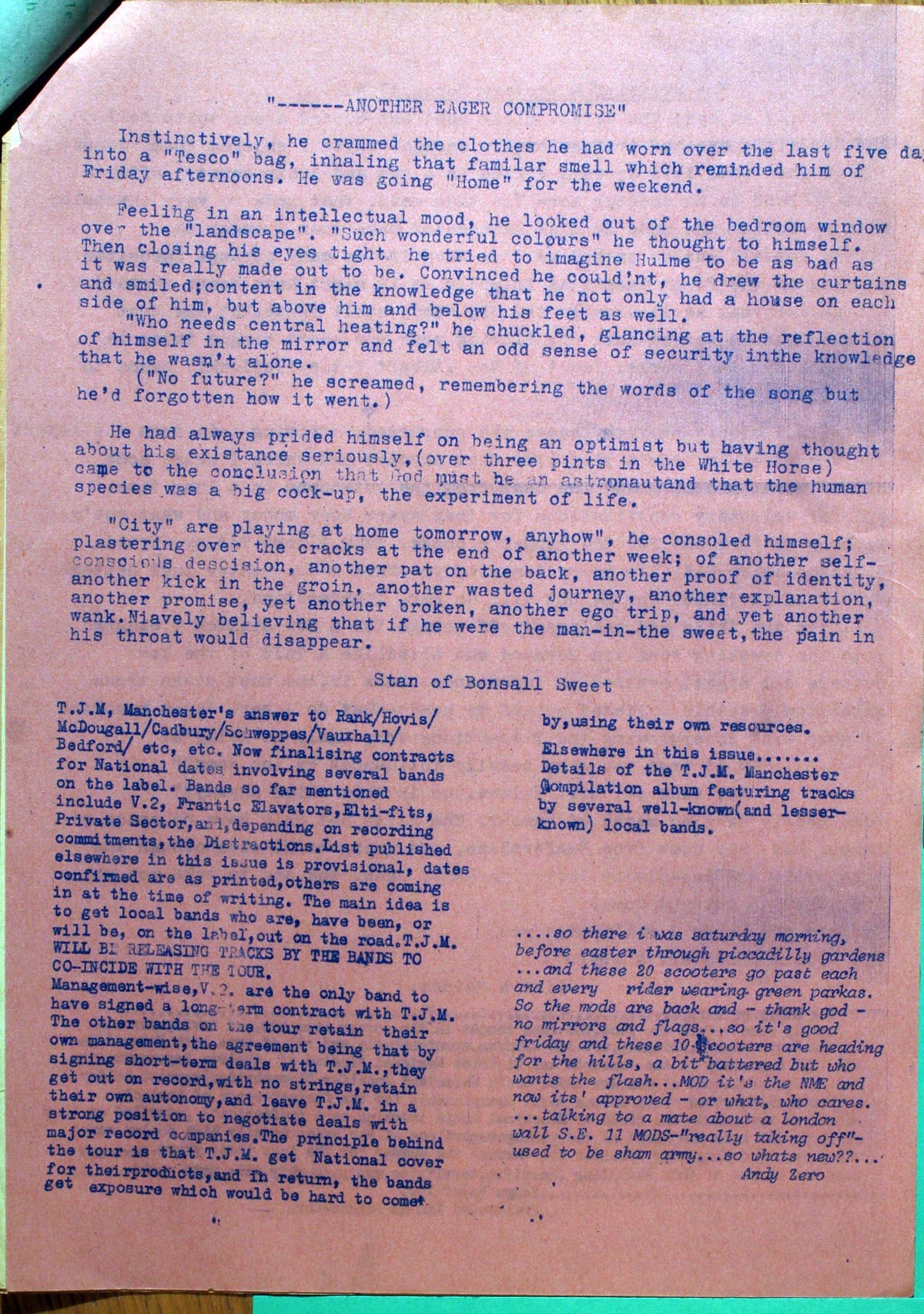 "-----------------ANOTHER EAGER COMPROMISE"
Instinctively, he crammed the clothes he had worn over the last five days into a "Tesco" bag, inhaling that familiar smell which reminded him of Friday afternoons. He was going "Home" for the weekend.
Feeling in an intellectual mood, he looked out of the bedroom window over the "landscape". "Such wonderful colours" he thought to himself. Then closing his eyes tight he tried to imagine Hulme to be as bad as it was really made out to be. Convinced he couldn't he drew the curtains and smiled; content in the knowledge that he not only had a house on each side of him, but above him and below his feet as well.
"Who needs central heating?" he chuckled, glancing at the reflection of himself in the mirror and felt an odd sense of security inthe knowledge that he wasn't alone.
("No future?" he screamed, remembering the words of the song but he'd forgotten how it went.)
He had always prided himself on being an optimist but having thought about his existance seriously, (over three pints in the White Horse) came to the conclusion that God must be an astronautand that the human species was a big cock-up, the experiment of life.
"City" are playing at home tomorrow, anyhow", he consoled himself; plastering over the cracks at the end of another week; of another self-conscious decision, another pat on the back, another proof of identity, another kick in the groin, another wasted journey, another explanation, another promise, yet another broken, another ego trip, and yet another wank.Niavely believing that if he were the man-in-the sweet, the pain in his throat would disappear.
Stan of Bonsall Sweet
T.J.M. Manchester's answer to Rank/Hovis/McDougall/Cadbury/Schweppes/Vauxhall/Bedford/ etc, etc. Now finalising contracts for National dates involving several bands on the label. Bands so far mentioned include V.2., Frantic Elevators,Elti-Fits, Private Sector,and,depending on recording commitments, the Distractions.List published elsewhere in this issue is provisional, dates confirmed are as printed,others are coming in at the time of writing. The idea is to get local bands who are, have been, or will be, on the label,out on the road.T.J.M. WILL BE RELEASING TRACKS BY THE BANDS TO COINCIDE WITH THE TOUR.
Management-wise,V.2. are the only band to have signed a long-term contract with T.J.M. The other bands on the tour retain their own management, the agreement being that by signing short-term deals with T.J.M., they get out on record,with no strings,retain their own autonomy,and leave T.J.M. in a strong position to negotiate deals with major record companies.The principle behind the tour is that T.J.M. get National cover for theirproducts,and in return, the bands get exposure which would be hard to come by,using their own resources.
Elsewhere in this issue....
Details of the T.J.M. Manchester compilation album featuring tracks by several well-known( and lesser-known) local bands.
...so there i was saturday morning before easter through piccadilly gardens... and these 20 scooters go past each and every rider wearing green parkas. So the mods are back and -- thank god -- no mirrors and flags...so it's good friday and these 10 scooters are heading for the hills, a bit battered but who wants the flash...MOD it's the NME and now its' approved - or what, who cares. ...talking to a mate about a London wall S.E. 11 MODS-"really taking off"- used to be sham army...so whats new??...
Andy Zero