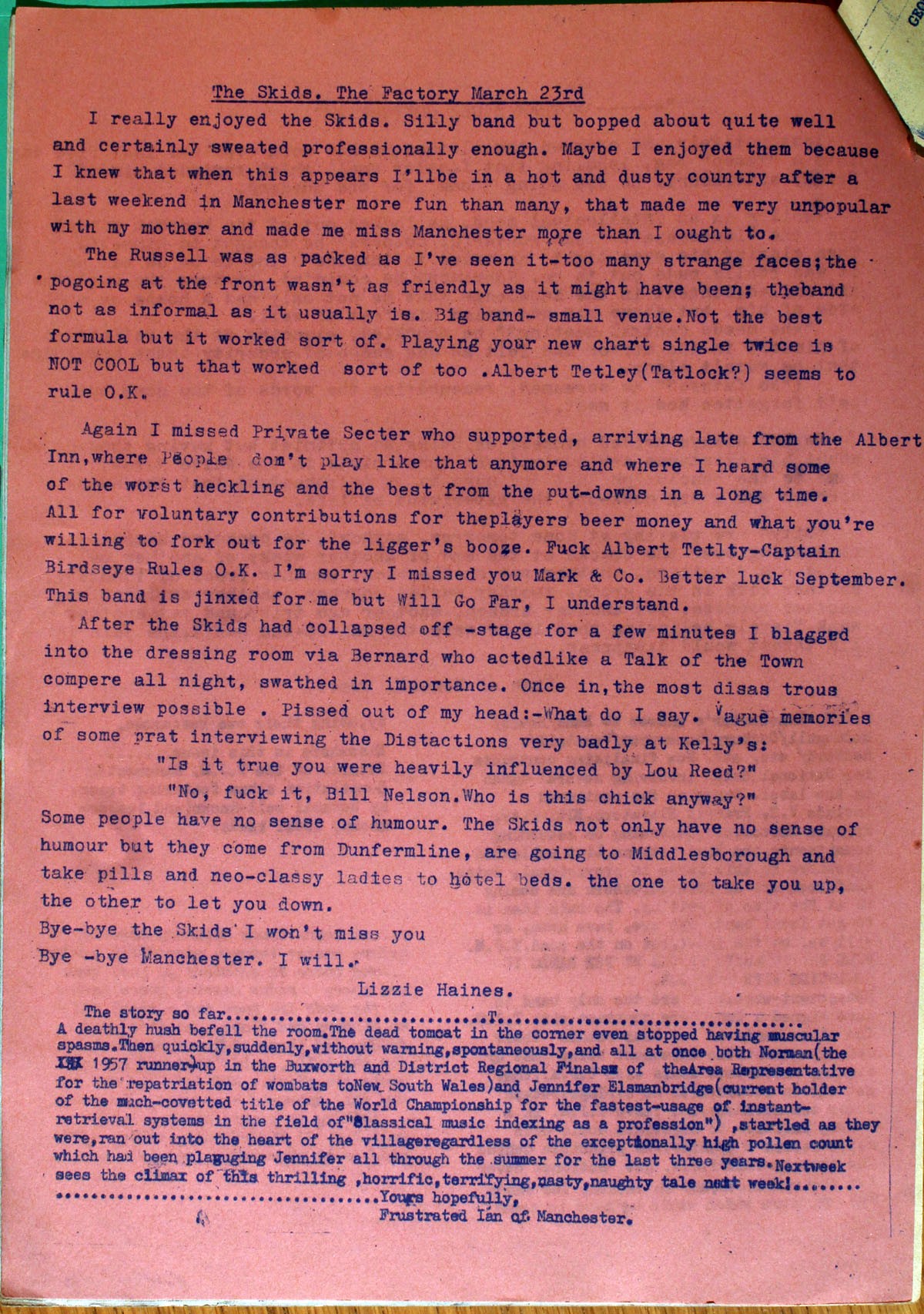 The Skids. The Factory March 23rd
I really enjoyed the Skids. Silly band but bopped about quite well and certainly sweated professionally enough. Maybe I enjoyed them because I knew that when this appears I'llbe in a hot and dusty country after a last weekend in Manchester more fun than many, that made me very unpopular with my mother and made me miss Manchester more than I ought to.
The Russell was as packed as I've seen it-too many strange faces;the pogoing at the front wasn't as friendly as it might have been; theband not as informal as it usually is. Big band- small venue.Not the best formula but it worked sort of. Playing your new chart single twice is NOT COOL but that worked sort of too .Albert Tetley(Tatlock?) seems to rule O.K.
Again I missed Private Secter who supported, arriving late from the Albert Inn,where People don't play like that anymore and where I heard some of the worst heckling and some of the best from the put-downs in a long time. All for voluntary contributions for theplayers beer money and what you're willing to fork out for the ligger's booze. Fuck Albert Tetlty-Captain Birdseye Rules O.K. I'm sorry I missed you Mark & Co. Better luck September. This band is jinxed for me but Will Go Far, I understand.
After the Skids had collapsed off -stage for a few minutes I blagged into the dressing room via Bernard who actedlike a Talk of the Town compere all night, swathed in importance. Once in, the most disas trous interview possible. Pissed out of my head:-What do I say. Vague memories of some prat interviewing the Distactions very badly at Kelly's:
"Is it true you were very heavily influenced by Lou Reed?"
"No, fuck it, Bill Nelson.Who is this chick anyway?"
Some people have no sense of humour. The Skids not only have no sense of humour but they come from Dunfermline, are going to Middlesborough and take pills and neo-classy ladies to hotel beds. the one to take you up, the other to let you down.
Bye-bye the Skids I won't miss you.
Bye -bye Manchester I will.
Lizzie Haines.
The story so far..............
A deathly hush befell the room.The dead tomcat in the corner even stopped having muscular spasms.Then quickly,suddenly,without warning,spontaneously,and all at once both Norman(the 1957 runner-)up in the Buxworth and District Regional Finals of theArea Representative for the repatriation of wombats toNew South Wales)and Jennifer Elsmanbridge(current holder of the much-covetted title of the World Championship for the fastest-usage of instant-retrieval systems in the field of"Classical music indexing as a profession") , startled as they were,ran out into the heart of the villageregardless of the exceptionally high pollen count which had been plaguging Jennifer all through the summer for the past three years.Nextweek sees the climax of this thrilling, horrific,terrifying,nasty,naughty tale next week!....
..........Yours hopefully,
Frustrated Ian of Manchester.