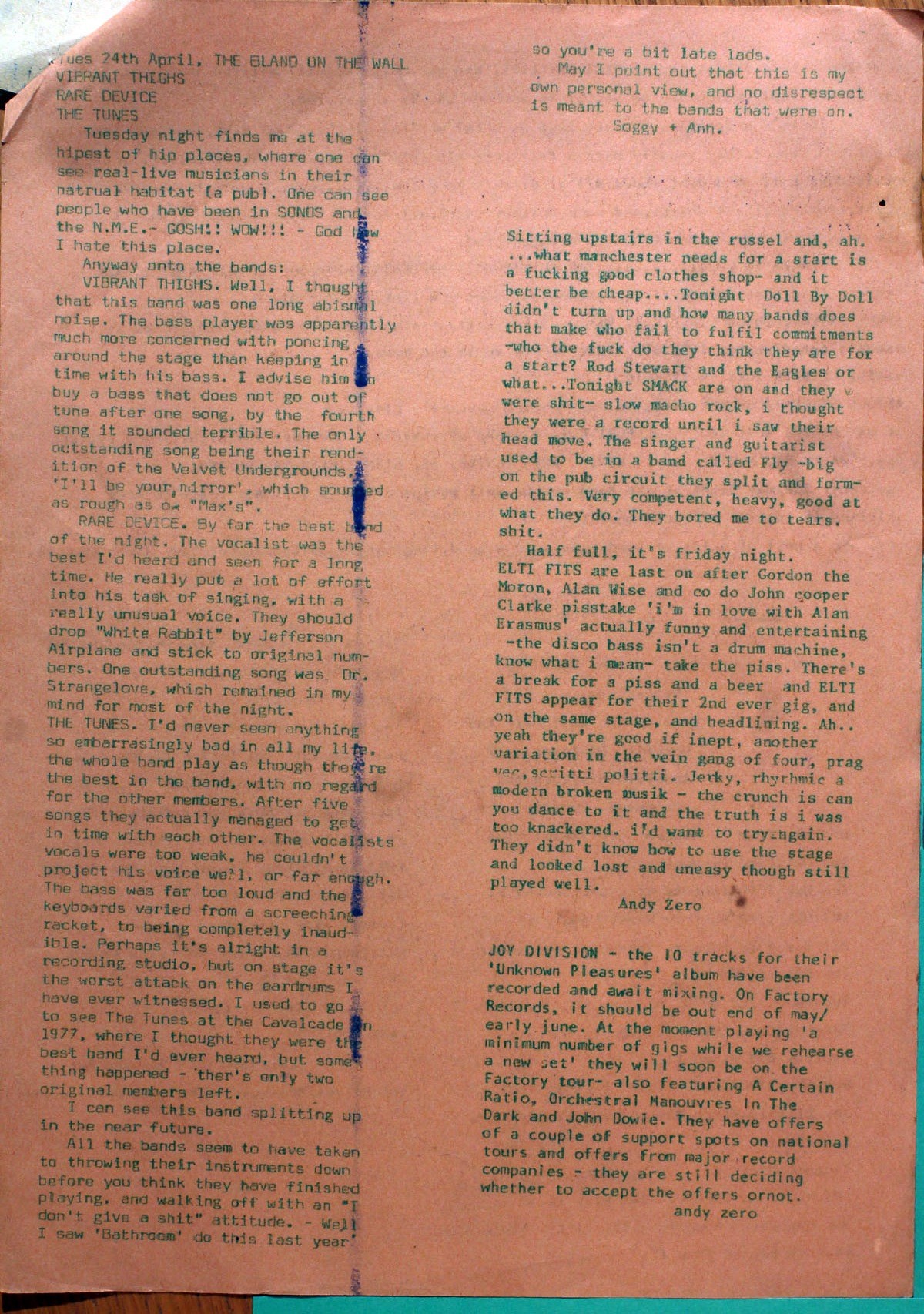 Tues 24th April, THE BLAND ON THE WALL
VIBRANT THIGHS
RARE DEVICE
THE TUNES
Tuesday night finds me at the hipest of hip places, where one can see real-live musicians in their natrual habitat (a pub). One can see people who have been in SONDS and the N.M.E.- GOSH!! WOW!! - God how I hate this place.
Anyway onto the bands:
VIBRANT THIGHS. Well, I thought that this band was one long abismal noise. The bass player was apparently much more concerned with poncing around the stage than keeping in time with his bass. I advise him to buy a bass that does not go out of tune after one song, by the fourth song it sounded terrible. The only outstanding song being their rend-ition of the Velvet Undergounds, 'I'll be your, mirror' , which sounded as rough as on "Max's".
RARE DEVICE. By far the best band of the night. The vocalist was the best I'd seen and heard for a long time. He really put a lot of effort into his task of singing, with a really unusual voice. They should drop "White Rabbit" by Jefferson Airplane and stick to original num-bers. One outstanding song was Dr. Strangelove, which remained in my mind for most of the night.
THE TUNES. I'd never seen anything so embarrasingly bad in all my life, the whole band play as if they're the best in the band, with no regard for the other members. After five songs they actually managed to get in time with each other. The vocalists vocals were too weak, he couldn't project his voice well, or far enough. The bass was far too loud and the keyboards varied from a screeching racket, to being completely inaudible. Perhaps it's alright in a recording studio, but on stage it's the worst attack on the eardrums I have ever witnessed. I used to go to see The Tunes at the Cavalcade in 1977, where I thought they were the best band I'd ever heard, but some thing happened - ther's only two original members left.
I can see this band splitting up in the near future.
All the bands seem to have taken to throwing their instruments down before you think they have finished playing, and walk off with an "I don't give a shit" attitude. Well I was "Bathroom" do this last year so you're a bit late lads.
May I point out that this is my own personal view, and no disrespect is meant to the bands that were on.
Soggy + Ann.
Sitting up stairs in the russel and, ah... what manchester needs for a start is a fucking good clothes shop- and it better be cheap....Tonight Doll by Doll didn't turn up and how many bands does that make who fail to fulfil commitments -who the fuck do they think they are for a start? Rod Stewart and the Eagles or what...Tonight SMACK are on and they were shit- slow macho rock, i thought they were a record until i saw their head move. The singer and guitarist used to be in a band called Fly -big on the pub circuit they split and form-ed this. Very competent, heavy, good at what they do. They bored me to tears. shit.
Half full, it's friday night.
ELTI FITS are last on after Gordon the Moron, Alan Wise and co do John cooper Clarke pisstake 'i'm in love with Alan Erasmus' actually funny and entertaining -the disco bass isn't a drum machine, know what i mean- take the piss. There's a break for a piss and a beer and ELTI FITS appear for their 2nd ever gig, and on the same stage, and headlining. Ah.. yeah they're good if inept, another variation in the vein gang of four, prag vec,scritti politti. Jerky, rhythmic a modern broken muzik - the crunch is can you dance to it and the truth is i was too knackered. i'd want to try again. They didn't know how to use the stage and looked lost and uneasy though still played well.
Andy Zero
JOY DIVISION - the 10 tracks for their 'Unknown Pleasures' album have been recorded and await mixing. On Factory Records, it should have been out end of may/early june. At the moment playing 'a minimum number of gigs while we rehearse a new set' they will soon be on the Factory tour- also featuring A Certain Ratio, Orchestral Manouvres In The Dark and John Dowie. They have offers of a couple of support spots on national tours and offers from major record companies - they are still deciding whether to accept the offers ornot.
andy zero