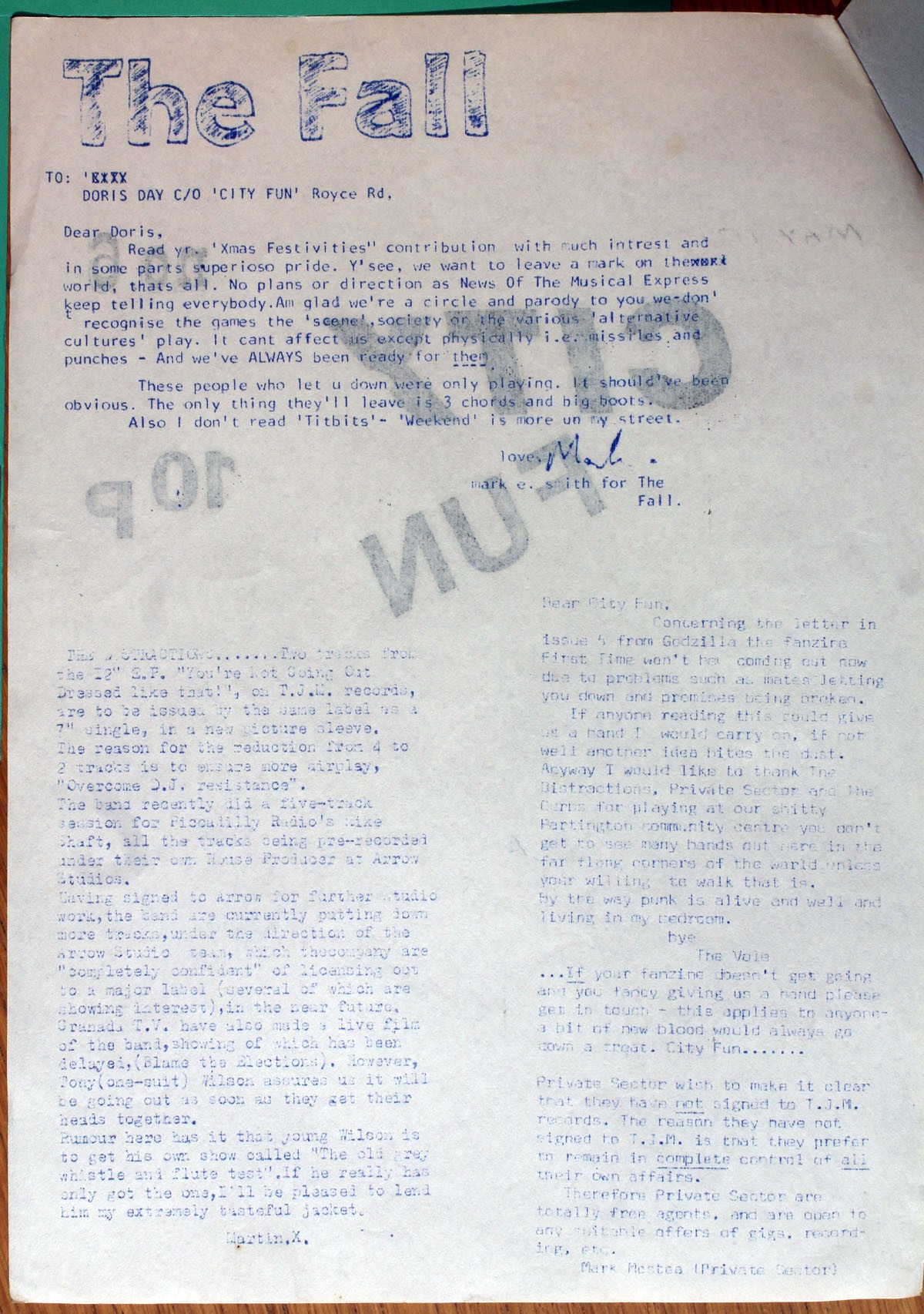 TRANSCRIPTION:
The Fall
TO: XXXX
DORIS DAY C/O 'CITY FUN' Royce Road
Dear Doris,
Read Yr. 'Xmas Festivities" contribution with much intrest and in some parts superioso pride. Y'see, we want to leave a mark on the world, that's all. No plans or direction as New Of The Musical Express keep telling everybody.Am glad we're a circle and parody to you we don't recognise the games the 'scene' society or the various 'alternative cultures' play. It cant affect us except physically i.e. missiles and punches - And we've ALWAYS been ready for them.
These people who let u down were only playing. It should've been obvious. The only thing they'll leave is 3 chords and big boots.
Also I don't read 'Titbits' - 'Weekend' is more up my street.
love Mark
mark e. smith for The Fall
THE DISTRACTIONS.....Two tracks from the 12" E.P. "You're Not Going Out Dressed like that!' , on T.J.M. records, are to be issued by the same label as a 7" single, in a new picture sleeve. The reason for the reduction from 4 to 2 tracks is to ensure more airplay, "Overcome D.J. resistance".
The band recently did a five-track session for Piccadilly Radio's Mike Shaft, all the tracks being pre-recorded under their own House Producer at Arrow Studios.
Having signed to Arrow for further studio work,the band is currently putting down more tracks,under the direction of the Arrow Studios team, which the company are "completely confident" of licensing out to a major label (several of which are showing interest), in the near future. Granada T.V. have also made a live film of the band,showing of which has been delayed,(Blame the Elections). However, Tony(one-suit) Wilson assures us it will be going out as soon as they get their heads together.
Rumour here has it that young Wilson is to get is own show called "The old grey whistle and flute test".If he really has got only the one,I'll be pleased to lend him my extremely tasteful jacket.
Martin.X.
Dear City Fun,
Concerning the letter in issue 5 from Godzilla the fanzine first time won't be coming out now due to problems such as mates letting you down and promises being broken.
If anyone reading this could give us a hand I would carry on, if not well another idea bites the dust. Anyway, I would like to thank The Distractions, Private Sector and The [obscured] for playing at our shitty Partington community centre you don't get to see many bands out here in the far flung corners of the world unless your willing to walk that is.
by the way punk is alive and well and living in my bedroom.
bye
The Vole
...If your fanzine doesn't get going and you fancy giving us a hand please get in touch -this applies to anyone- a bit of new blood would always go down a treat. City Fun.....
Private Sector wish to make it clear that they have not signed to T.J.M. records. The reason they have not signed to T.J.M. is that they prefer to remain in complete control of all their own affairs.
Therefore Private Sector are totally free agents, and are open to any suitable offers of gigs, recording, etc.
Mark Mestea (Private Sector)