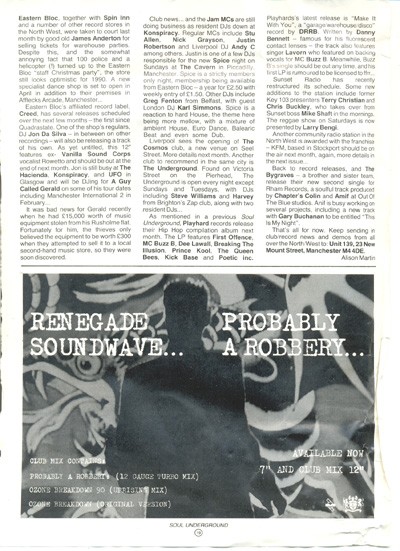 "Eastern Bloc, together with Spin Inn and a number of other record stores in the North West, were taken to court last month by good old James Anderton for selling tickets for warehouse parties.
Despite this, and the somewhat annoying fact that 100 police and a
helicopter turned up to the Eastern Bloc "staff Christmas party", the store still looks optimistic for 1990. A new specialist dance shop is set to open in April in addition to their premises in
Afflecks Arcade.

Eastern Bloc's affiliated record label, Creed, has several releases scheduled over the next few months - the first since Quadrastate. One of the shop's regulars, DJ Jon Da Silva will also be releasing a track of his own. As yet untitled, this 12" features Vanilla Sound Corps vocalist Rowetta and should be out at the end of next month. Jon is still busy at the Hacienda, Konspiracy, and UFO in Glasqow and will be DJing for A Guy Called Gerald on some of his tour dates, including Manchester International 2 in February.

It was bad news for Gerald recently when he had £15,000 worth of music equipment stolen from his Rusholme flat. Fortunately for him, the thieves only believed the equipment to be worth £300 when they attempted to sell it to a local second-hand music store, so they were soon discovered.

Justin is one of a few DJs responsible for the new Spice night on
Sundays at The Cavern in Piccadilly,
Manchester. Spice Is a strictly members only night, membership being available from Eastern Bloc—a year for £2.50 with weekly entry of £1.50.

Other DJs include Greg Fenton from Belfast, with guest London DJ Karl Simmons. Spice is a reaction to hard House, the theme here being more mellow, with a mixture of ambient House, Euro Dance, Balearic Beat and even some Dub.

Liverpool sees the opening of The Cosmos Club, a new venue on Seel Street. More details next month.

Another club to recommend in the same city is The Underground. Found on Victoria street on the Pierhead, The Underground is open every night except Sundays and Tuesdays, with DJs including Steve Williams and Harvey from Brighton's Zap club, along with two
resident DJs.

Playhards's latest release is "Make It With You", a "garage/warahouse/disco" record by DRRB. Written by Danny Bennett - famous for his flourescent contact lenses - the track also features singer Lavorn who featured on backing vocals for MC Buzz B. Meanwhile, Buzz B's single should be out any time. and his first LP is rumoured to be licensed to ffrr...

Sunset has recently restructured its schedule. Some new additions to the station include former Key 103 presenters Terry Christian and
Chris Buckley, who takes over from Sunset boss Mike Shaft in the mornings. The reggae show on Saturdays is now presented by Larry Bengi.

Another community radio station in the North West is awarded with the franchise - KFM, based in Stockport should be on the air next month, again, more details in the next issue...

Back to record releases, and The Bygraves - a brother and sister team, release their new second single for Rnam Records, a soulful track produced by Chapter's Colin and Aniff at Out Of The Blue studios. Aniff Is busy working on several projects, including a new track with Gary Buchanan to be entitled "This Is My Night".

That's all for now. Keep sending in club/record news and demos from all over the North West to: Unit 139,23 New Mount Street, Manchester M4 4DE