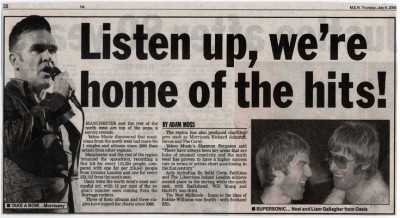 Press article from the Manchester Evening News July 6 by Adam Moss which reads;

Manchester and the rest of the north west are top of the pops, a survey reveals.

Yahoo Music discovered that musicians from the north west had more No 1 singles and albums since 2000 than artists from other regions.

Manchester and the rest of the region trounced the opposition, recording a No 1 hit for every 115,254 people, compared with one hit per 216,647 people from Greater London and one for every 253,125 from the south east.

Oasis were the north wests most successful act, with 12 per cent of the region's number one's coming from the Burnage rockers.

Three of their albums and three singles have topped the charts since 2000.

The region has also produced chart-toppers such as Morrisey, Richard Ashcroft, Doves and The Coral.

Yahoo's Music's Shannon Ferguson said "There have always been key areas that are hubs of musical creativity and the north west has proven to have a higher success rate in terms of artists chart positioning in the 21st century."

Acts including So Solid Crew, Faithless and The Libertines helped London achieve second place in the survey, while the south east with Radiohead, Will Young and Hard-Fi, was third.

The West Midlands - home to the likes of Robbie Williams was fourth - with Scotland fifth.
Artefact added : 5th June 2007
by 1963