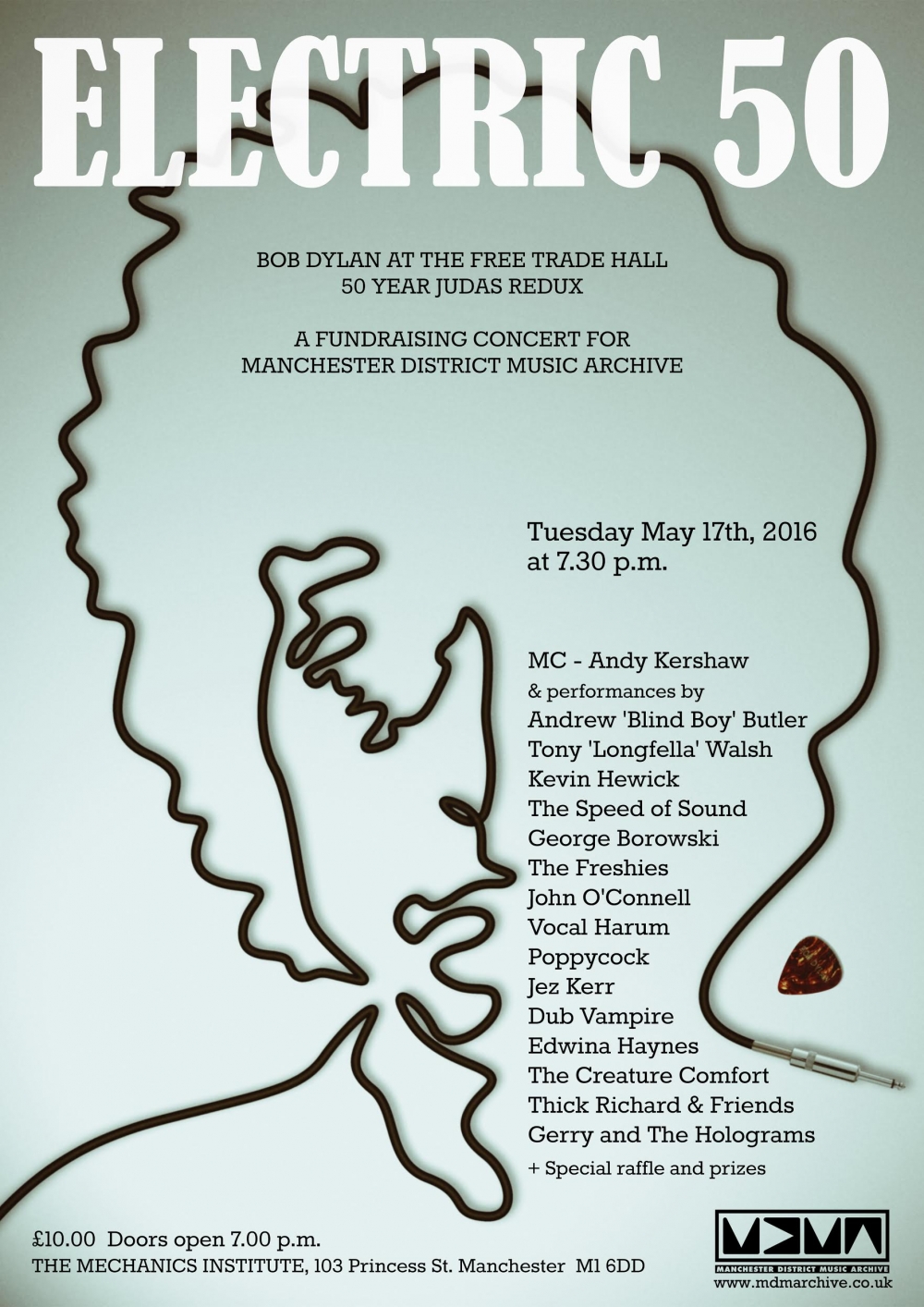 A celebration of the 50th anniversary of Bob Dylan's 'Judas' gig at the Free Trade Hall, held at Academy 2. This event was a benefit for Manchester District Music Archive - our first since becoming a charity.

‘Judas!’ is a shout that has been echoed through music history for half a decade, after a heckler loudly accused Bob Dylan of heresy by ‘going electric’ in 1966. That famous moment at Manchester’s Free Trade Hall is being celebrated 50 years later by a collective of musicians, playing Dylan’s same set list in full, little over a mile away from where the incident took place.

Manchester District Music Archive (MDMArchive) is celebrating the anniversary with a fundraising concert, Electric 50, taking place on Tuesday 17th May 2016 at the Academy 3 (Hop and Grape) in Manchester University Students’ Union, Oxford Road. Contributors, including Jez Kerr of A Certain Ratio, Manchester guitar legend George Borowski and BBC 6 Music favourite Thick Richard, will interpret Dylan’s original performance and leave it up to the audience whether to recreate the famous heckle.

Dr CP Lee, co-founder of MDMArchive and author of ‘Like the Night’ which chronicle’s Dylan’s controversial electric tour, says:

“Dylan’s emergence for the second half of his Manchester concert and ‘plugging in’ is hailed as one of the twenty most important moments in rock history, noted as the electrifying night the young American poet clashed head on with the traditionalist die-hards of the British folk scene. 50 years on, Manchester celebrates one of the most remarkable moments to have happened on one of its stages.”

Electric 50 audiences will also get the chance to walk away with a piece of remarkable memorabilia, with six raffle prizes of Mark Makin, presentation-sized original photographs from the 1966 Free Trade Hall concert itself. Each will be signed by Mark who famously took the only known photos of this historic gig when he was a 15-year-old schoolboy.

Broadcaster Andy Kershaw is to compere the show. Andy tracked down and unmasked the heckler who shouted "Judas!" and 32 years after the event revealed him in 'Ghosts of Electricity’, the award-winning BBC Radio 1 documentary.

Electric 50 will begin with an introduction from poet Tony ‘Longfella’ Walsh and then the following artists will perform the two halves of the concert: